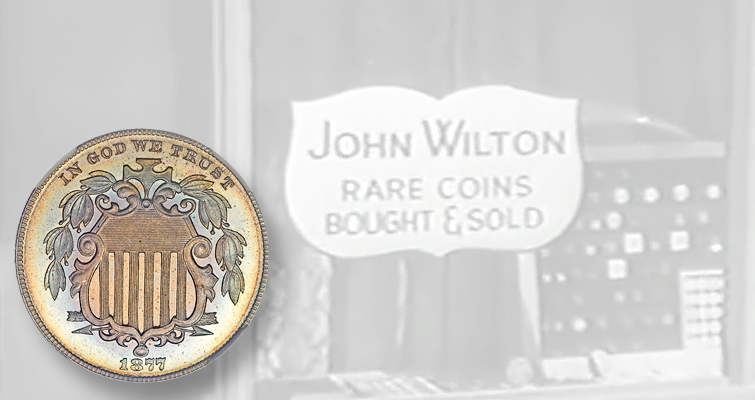 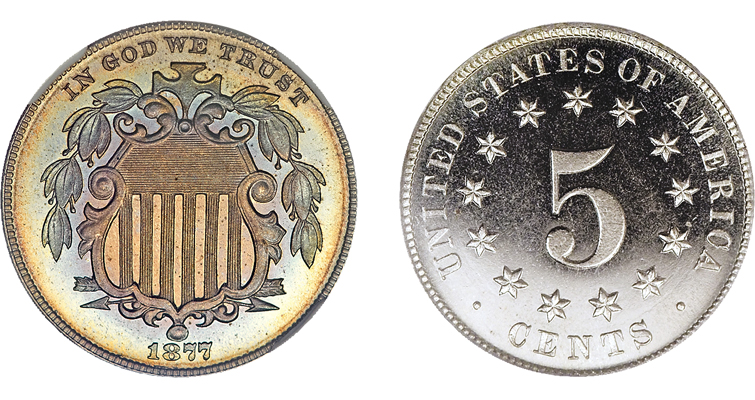 An example of a Proof-only 1877 Shield 5-cent coin, illustrated, was the subject of the 1951 pilot episode of the Amos ‘n Andy television show in which one of the coins was found in an old trunk. 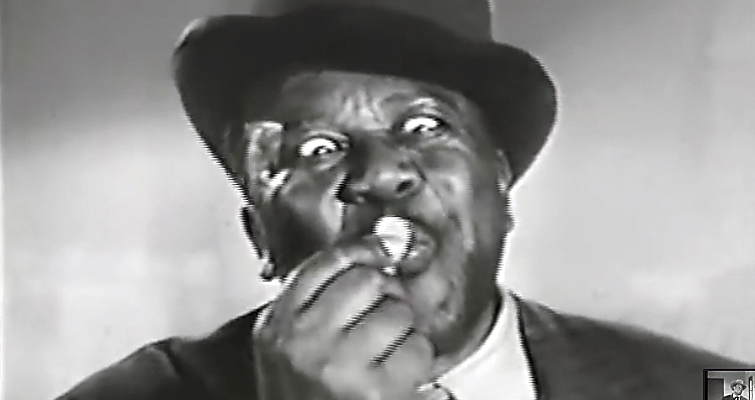 Andy from the Andy n' Amos television show kisses an 1877 Shield 5-cent coin for good luck, not knowing the coin and he will soon be parted.

The cover story “Coins on Television” that I wrote for the March issue of Coin World Monthly elicited several emails about readers’ favorite numismatic episodes, including one from public relations pro Donn Pearlman.

He wrote, “The 1951 pilot episode for the Amos ‘n Andy television series (based on the radio program that started in 1928) centered around a rare nickel.”

The pilot for the TV show, which ran through 1953, ran as the 28th episode of the first season. It was titled “Rare Coin.”

As the camera focuses in on John Wilton’s coin store, Amos sets up the episode, “Ladies and gentlemen, this is Amos. I just wanted to tell you about something that happened to my friend Andy and the Kingfish. They found a nickel in an old trunk. It was dated 1877 so Andy wrote a letter to Mr. Wilton, a coin dealer.”

Inside the store at 137 E. 47th St., Wilton dictates a letter to his secretary: “The current market of this coin is $250. If you bring the coin in, we will be happy to pay you this amount.”

The date of the coin and the location of the coin shop indicated a more than passing familiarity with coins by the show’s writers.

The 1877 Shield 5-cent piece is a Proof-only issue with a mintage of just 900 coins. Only a collector would know about the issue. Despite its low mintage, it is not wildly popular, cataloging for just $3,500 in Proof 63.

The shop’s location, now a Japanese restaurant, may have been a nod to the famed New Netherlands Coin Co. The company, home base for numismatists John J. Ford Jr. and Walter Breen, was at 1 W. 47th St.

After the Kingfish finds out about the rare coin, he sets out to steal it by pretending to be a doctor. “I think I is about to perform a nickelectomy,” he schemes.

He tells Andy, “I been taking a correspondence course in doctoring,” as he examines him. “I see you is suffering from a slight inflagation of the optimistic nerve there.”

Kingfish then bandages Andy’s eyes so he can steal the nickel from his pants pocket and leaves a blindfolded Andy alone.

At a nearby pharmacy, Kingfish goes to a phone booth to call the coin dealer, but inadvertently uses the nickel to pay for the call.

After a trip to jail and court, Andy eventually gets his nickel back, presumably none the worse for the trip through the pay phone. However, the grading services have graded about two-dozen circulated Proof examples.