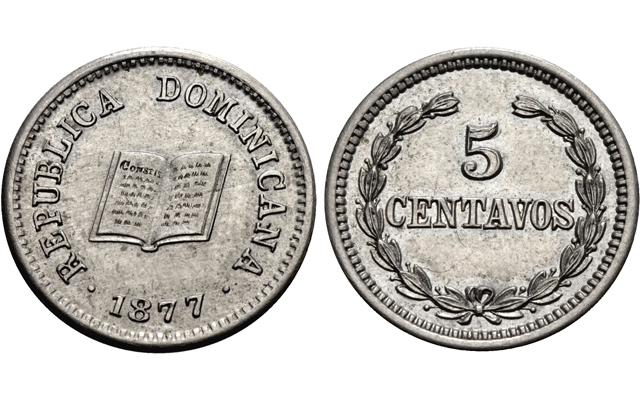 In 1877, Scovill Manufacturing in Waterbury, Conn., produced three denominations of coins for the Dominican Republic, including this 5-centavo piece.

Printed catalogs are available for purchase, or may be viewed at the firm’s website.

Coin World is highlighting three issues that combine condition, rarity and history. Below is the second.

Scovill Manufacturing of Waterbury, Conn., produced blanks for minor coins for the U.S. Mint over a 40-year period until the Third Philadelphia Mint opened in 1901.

It also has a legacy for producing world coins, some 22 coins for 11 countries over about 40 years.

One of its earliest coinage commissions was the charge to produce 1-, 2½- and 5-centavo coins for the Dominican Republic in 1877. The coins are one-year types, meaning they were only issued for that one year with that design.

The copper-nickel 5-centavo coin is graded MS-62 and is in “lightly toned Unc[irculated]” condition.

The 17-millimeter-diameter coin was nearly the same size as the Seated Liberty dime then circulating in the United States (which measures 17.91 millimeters in diameter).

The sparse design shows an open book with the nation’s constitution on the obverse and a wreath and denomination on the reverse.