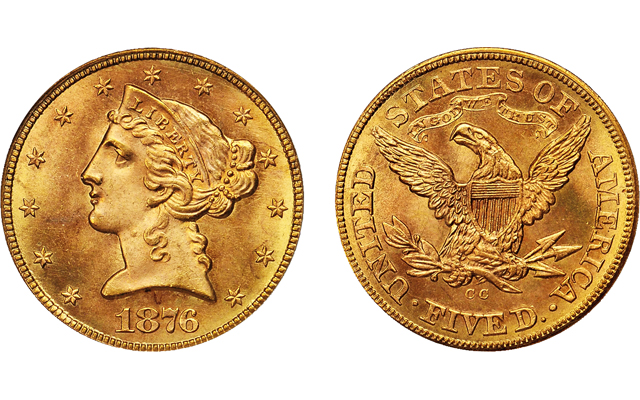 Stack’s Bowers Galleries is gearing up for its Rarities Auction on May 20 in New York City. The sale follows the May 19 auction with Sotheby’s featuring 128 coins from the D. Brent Pogue Collection.

Carson City Mint coins are always popular with collectors because no other U.S. Mint conjures up such rich images of the Old West in one’s mind.

The firm writes in the description, “This is the finest known Carson City Mint gold coin of any denomination.” It adds, “This truly phenomenal piece offers technical quality and eye appeal more akin to what one would expect to see on a common date Liberty half eagle, but not on a key date rarity from the Carson City Mint. The vibrant, satiny mint luster is full and there are modest hints of reflectivity in the open fields around the central devices.”

The gold stunner is from an original mintage of 6,887 pieces, and published estimates of the number of surviving pieces range from a low of 80 to as many as 160. It has an extensive provenance that goes back to the Champan brothers in 1893, and continues to the John H. Clapp collection’s 1942 sale where it sold to Louis Eliasberg Sr. It sold at Bowers and Ruddy’s October 1982 auction of Eliasberg’s gold coins for $26,400 and then was offered several more times at auction, most recently at Stack’s Bowers’ 2012 auction of the Battle Born Collection of Carson City Mint Coinage where it brought $477,250.

At the Battle Born Collection it was described by expert Rusty Goe as follows: “Gold coin experts recognize the extraordinary 1876-CC half eagle, graded MS-66 by PCGS, as not just the finest example known for this date, and not just the finest known half eagle of any of the 19 dates issued at Carson City, but as the finest surviving gold coin of any denomination from that mint.”