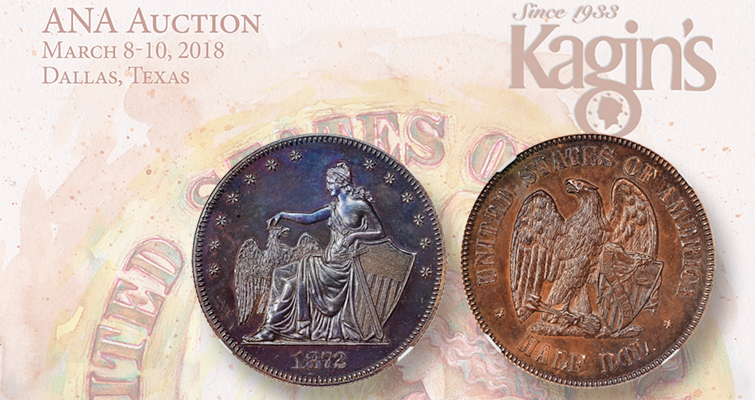 A handsome 1872 Amazonian pattern half dollar graded Proof 67 red and brown is a highlight of Kagin’s auction at the National Money Show and is interpreted on the firm's catalog cover by Italian artist Sandra Deiana. 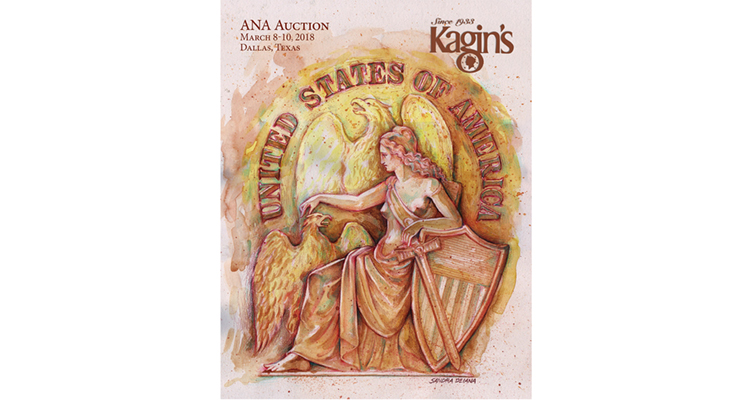 Italian graphic artist Sandra Deiana used the Amazonian obverse design as inspiration for her cover for the catalog for the Kagin’s ANA National Money Show auction.

Among the lead consignments are more than 50 U.S. pattern coins from the Dr. George Barber Collection, including one of the finest known 1872 Amazonian copper half dollars, graded Proof 67 red and brown by Numismatic Guaranty Corp. William Barber’s design gets its nickname from his powerful depiction of Liberty, who rests her arm on a shield while holding a long sword, breasts exposed, her wavy hair topped by a cap. Charmingly, Liberty pets an eagle.

An eagle with spread wings — perhaps the same one depicted on the obverse — appears on the reverse, holding three arrows in its right talons while its other talons rest on a shield against which it grips an olive branch and a ribbon emblazoned IN GOD WE TRUST.

The two designs were used on the quarter dollar and dollar denominations as well, and the “Amazonian” name’s first usage is recorded in an 1890 auction.

Kagin’s says that the pattern, which is listed as Judd 1201 and Pollock 1341 in the references to the pattern series, “offers a study in deep chocolate-brown with a subtle chestnut underglow on the obverse,” before concluding that, “on the whole, the aesthetics are choice, the surfaces are essentially mark-free, and even the smallest design elements are as crisp as intended by the artist.” It is one of perhaps 10 known of this Judd variety and is considered among the finest known.

The firm held a contest for designs for the ANA National Money Show cover art, and the pattern inspired this year’s catalog’s winning cover art, a submission by Italian graphic artist Sandra Deiana. She was a runner-up in Kagin’s competition last year and previously designed a 2016 silver €10 coin honoring Irish designer and architect Eileen Gray that was issued by the Central Bank of Ireland.

Don Kagin, president of Kagin’s Auctions who is also currently vice president of the ANA, said: “To me, this is one of the most vibrant, enchanting and beautiful of all numismatic designs. I think it is appropriate that for the first time an artistic image of this popular design, which so eloquently merges art and numismatics, graces a major auction catalog.” 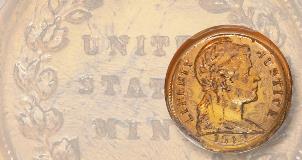