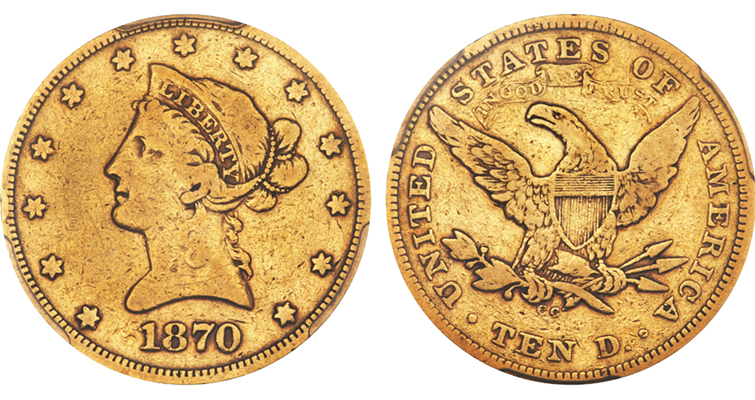 When the Carson City Mint began gold production in 1870, it did so on a relatively modest scale with low mintages for all three of the gold denominations it produced that year: $5 half eagles, $10 eagles and $20 double eagles.

The 1870-CC Coronet $10 gold eagles are rare, with a low mintage of 5,908, of which an estimated 45 to 60 survive today. Heritage suggests that even this traditional estimate may be generous.

No Mint State examples are known, with the finest piece grading About Uncirculated 55 and the majority showing moderate to heavy circulation. At Heritage’s 2015 ANA auction, an example grading Very Good 10 by Professional Coin Grading Service brought $28,200.

That price is especially strong when considering that a different example in the same grade sold for $13,225 at a June 2008 Heritage sale, but it is slightly less than an NGC Fine 12 example sold for at Heritage’s March 20, 2014, sale of the Donald E. Bently Collection.

Keep up with all of CoinWorld.com's news and insights by  signing up for our free eNewsletters, liking us on Facebook, and following us on Twitter. We're also on Instagram!