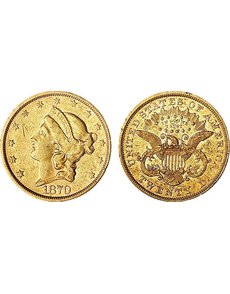 An 1870-CC Coronet gold $20 double eagle that has not been publicly seen since it was purchased at auction 50 years ago is returning to the auction block.

The Mapes coin is consigned to a Sept. 4 Bonhams & Butterfields auction in Los Angeles.

According to Paul Song, director of Bonhams & Butterfields Rare Coins and Bank Notes Department, the 1870-CC double eagle has been in the Mapes Collection since it was purchased in the Feb. 16 to 18, 1961, public auction in New York City conducted by Abner Kreisberg from Beverly Hills, Calif., and Hans M.F. Schulman from New York City.

The coin was described in the 1961 Kreisberg/Schulman auction catalog as “strictly very fine.” The Mapes coin is currently not certified by a third-party grading service, nor will it be for the auction, Song said. The auction catalog will list the coin’s grade as “Extremely Fine,” he said.

Song said the coin was housed in a Capital Plastics holder and its rarity was unknown to the consignor when brought to the auction house for consignment.

As of June 14, Professional Coin Grading Service has handled 28 submissions of the 1870-CC double eagle, with the PCGS Population Report listing submissions from a single Fine 15 coin up to a single About Uncirculated 53 example. Most of the submissions graded Extremely Fine 40 to AU-50.

Numismatic Guaranty Corp.’s NGC Census Report as of June 14 identifies 28 submissions to that firm, from a single Fine 15 example to the highest-graded piece, a single About Uncirculated 55 coin. Most of the pieces graded are in Very Fine 20 to AU-53 condition. ¦