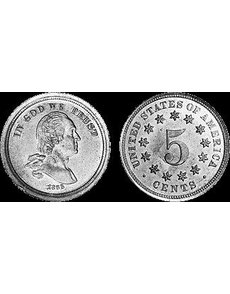 An 1866 Washington Head 5-cent pattern (Judd 479) with the regular reverse adopted in 1867 was one of countless improbable die pairings and special pieces made at the Mint, but only available to buyers with special connections.

The American Journal of Numismatics, launched by the American Numismatic and Archaeological Society in May 1866, is free online at Google Books. Until now, I dearly cherished my set of bound volumes that I’ve owned since the 1950s. I still love my set, but here I am writing an article with the Internet version up on my screen.

Last week, I quoted the announcement in the July 1866 issue of AJN that a new denomination — the copper-nickel 5-cent piece — had made its debut. At the same time, the Mint was secretly making 5-cent patterns and unusual die combinations of other denominations for private sale (by the officers, not the Mint itself) to numismatists.

A correspondent wrote about the designs and the method of distribution in the August 1866 issue:

“The New Five-Cent Piece: Though collectors have long ceased to regard the true issues of the ‘Government copper-head factory,’ better known, perhaps, as the United States Mint, as of any value, they may be interested in the information that the ugliest of all known coins, the new five cent piece, is out, as oysters are served in some places ‘in every style.’

“Though specimens [of related patterns] are refused to societies and individuals, they are readily procured in Philadelphia through the agents of the young gentleman at the head of that department. At present the price of a set of four, struck in various metals, with a copper gold dollar included, is $35. ... Are we to be afflicted with any more of these horrible little composition counters — called coins by courtesy, whose ugliness is only equaled by their intrinsic worthlessness; and whose whole appearance, both in design and execution, is so despicable? ...”

This and other slings and arrows finally convinced Mint spokesman W.E. Dubois to write to the AJN, June 1867, to state that Director Henry R. Linderman, cast as a model of rectitude, directed that future production of patterns “will be limited to their original purpose, and of course in a small number of pieces.” Moreover, the use of off-metals and mismatched dies was now forbidden.

Linderman, one of the most egregious liars and issuers of false statements, never did make patterns generally available to numismatists, Mint officers continued to rake in profits, and off-metal and weird combinations proliferated. This is good news. If it were not for Linderman and others from 1859 until the game ended in 1885, more than 90 percent of the patterns now in numismatic hands would never have been made.