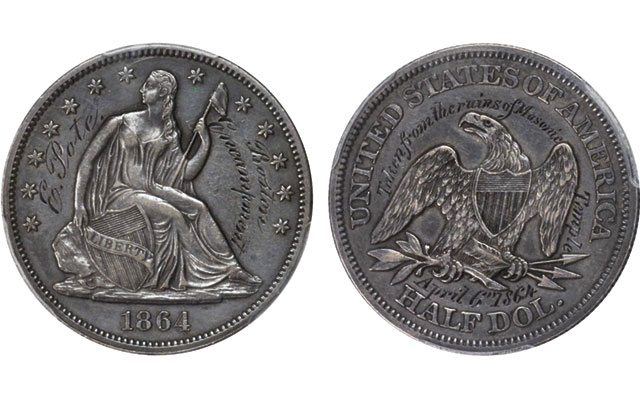 1864 Seated Liberty half dollar was struck from silver recovered from the April, 5, 1864, fire at the Boston Masonic Lodge, known as Winthrop House.

Silver from ceremonial implements recovered from the April 5, 1864, fire at the Boston Masonic Lodge known as Winthrop House was reclaimed for striking at the Philadelphia Mint into 1864 Seated Liberty half dollars.

A handful of the coins, engraved with the details of the coin's manufacture and the silver used to strike them, are known to exist.

One of the known pieces is to be offered Feb. 5 in New York by Stack's Bower's Galleries. It is one of 2,756 lots the firm is offering Feb. 5 and 6 in its February 2015 Americana Auction.

The public auction sessions will be held in Stack’s Bowers’ galleries at 110 W. 57th St. in New York City.

Additional lots are being offered Feb. 10 by online bidding only.

The example to be offered by Stack's Bowers is graded About Uncirculated 50 by Professional Coin Grading Service.

The auction cataloger believes E. Pote to be Elisha Pote, who is mentioned in the 1874 Proceedings of the Grand Commandery of Knights Templars and the Apendant Orders of Massachusetts and Rhode Island.

It is believed the fire in the six-story Masonic lodge occurred on April 5, 1864; the damaged silver implements were recovered the following day.