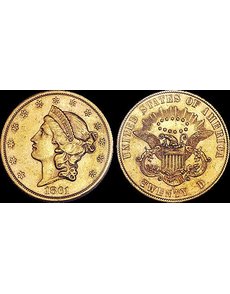 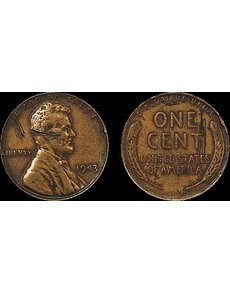 The coin was one of nearly 2,000 lots offered in four floor sessions Nov. 1 and 2 at Heritage Auctions’ New York galleries at 445 Park Ave., 15th Floor. Heritage is headquartered in Dallas.

Among other lots in the auction was the finest of five known Proof 1839 Seated Liberty, No Drapery half dollars. The example in the Heritage auction, certified Professional Coin Grading Service Secure Proof 64+ and stickered by Certified Acceptance Corp., brought $223,250.

Each price realized includes a 17.5 percent buyer’s fee added to the final closing price of the lot.

In his work, Paquet was known to have a penchant for a font style characterized by “tall, thick verticals and diagonals on the letters, with thin horizontals and serifs,” according to the lot description.

Dies were also delivered to the Branch Mints in New Orleans and San Francisco.

The New Orleans Mint did not strike any 1861-O Coronet, Paquet Reverse double eagles, having received a telegraph message to halt production before it began.

Because no transcontinental telegraph wires extended to San Francisco from the East, by the time Snowden’s edict reached the West Coast facility, the San Francisco Mint had already struck 19,250 of the coins, all of which are reported to have entered circulation.

Today, approximately 100 examples of the 1861-S Coronet, Paquet Reverse double eagle are extant, with no examples certified in Mint State.

Proof No Drapery half dollar

Research published in the late 1970s by author Walter Breen suggested three examples known of the 1839 Seated Liberty, No Drapery half dollar in Proof.

According to the auction lot description, one of the three examples Breen had classified as Proof was a circulation strike.

Since then, other Proof examples have been discovered, bringing the total known to five.

“Each of the true proof 1839 No Drapery half dollars has a fine die crack through the base of HALF DOL., continuing faintly through the tops of MERICA,” according to the auction lot description. “Light clash marks are evident within the spaces of the vertical shield stripes, and several of the vertical lines extend into the horizontal cross bars. This reverse die was used for both proofs and business strikes, so it is unreliable as a diagnostic. There are no characteristics that will aid in differentiating between proofs and business strikes, aside from the quality of production.”

The two bronze Lincoln cent errors, offered from the Geyer Family Collection, were the result of leftover planchets from 1942 being fed into the coinage presses instead of the intended zinc-coated steel planchets at the Philadelphia, Denver and San Francisco Mints.

The PCGS Genuine bronze 1943 Lincoln cent made its auction debut at the Heritage auction. It is one of fewer than 20 examples known.

The coin in the auction is easily identifiable by the obverse scratches in the field behind Lincoln’s head and the horizontal gash from Lincoln’s cheek to the back of his head.

Heavy scratches appear on the reverse in the field to the right of ONE CENT.

The marks are believed to have been made by whoever discovered the coin, to test its authenticity.

The 1943-S bronze cent is one of approximately six examples known.

The highest price paid for any of the off-metal 1943 or 1944 small cent errors and for any small cent is the $1.7 million paid in a private transaction by an unnamed collector to Legend Numismatics for the only known bronze 1943-D Lincoln cent, graded PCGS MS-64 brown.