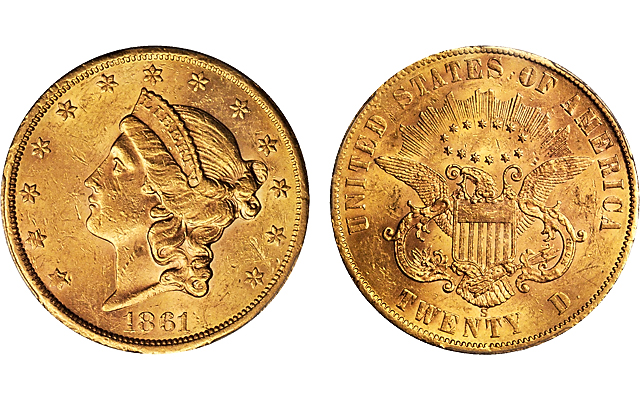 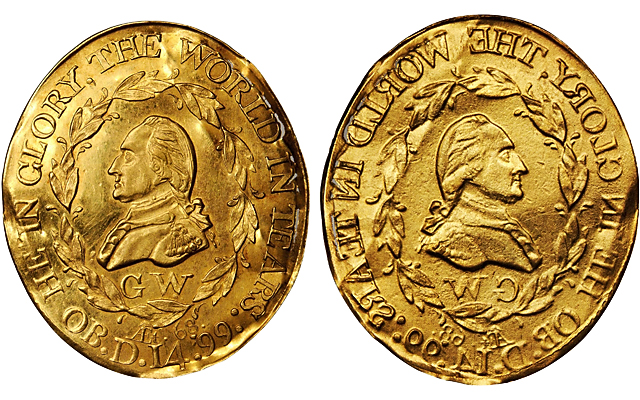 Uniface oval Washington Funeral medal in gold was struck and intended to be worn by ladies in mourning over the president’s Dec. 14, 1799, death. This About Uncirculated exampled sold for $15,275. 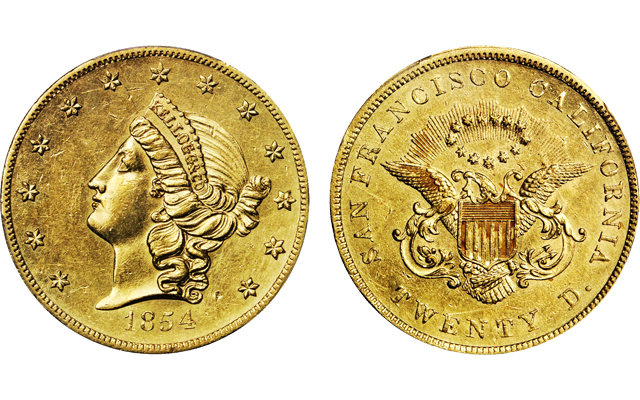 The prices realized for the two floor sessions held in conjunction with the Whitman Baltimore Coin and Collectibles Expo include the 17.5 buyer’s fee added to the final closing hammer price of each lot won.

In his work, Paquet was known to have a penchant for a particular font style. The style was characterized by tall, thick verticals and diagonals on the letters, with thin horizontals and serifs.

Only two examples from the Philadelphia Mint are known to remain, although a third is rumored to exist.

Dies with the Paquet design were delivered to the Branch Mints in New Orleans and San Francisco before the decision to stop production was made.

The New Orleans Mint did not strike any 1861-O Coronet, Paquet double eagles, having received a telegraph message to halt production before it began.

Because no transcontinental telegraph wires extended to San Francisco from the East, by the time Snowden’s edict reached the West Coast facility, it had already struck 19,250 of the coins, all of which are reported to have entered circulation. Today, approximately 100 examples of the 1861-S Coronet, Paquet Reverse double eagle are extant, with no examples certified in Mint State.

The funeral medal, cataloged as Baker 169 in W.S. Baker’s Medallic Portraits of Washington, is uniface, and measures 24 millimeters by 29 millimeters.

The medal was intended to be worn by women in memorial to the late president, who died on Dec. 14, 1799.

Approximately a dozen of the gold medals are known to exist, with several of them in institutional collections.

According to the auction description, “On January 13, 1800, goldsmith and jeweler Eben Moulton of Cornhill Street in Boston listed the following classified advertisement in the Columbian Centinel and Massachusetts Federalist: ‘FOR THE LADIES. Washington Medals, designed to put up in Lockets &c. executed by Mr. Perkins, for sale at No. 11 Cornhill by Eben Moulton.’ ”

The pioneer gold coin or slug is the Short Arrows variety, attributed as Kagin 1b as cataloged in Donald Kagin’s Private Gold Coins and Patterns of the United States.

When the U.S. Assay Office of Gold shut down, Dec. 14, 1853, the new San Francisco Mint had not yet started coin production. The Assay Office facility was being refurbished to house the Branch Mint.

Because of the immense popularity of the gold coins with the public, who used them in commerce, most examples known are heavily circulated or otherwise impaired.

For more information on the sale, visit the auction firm's website.