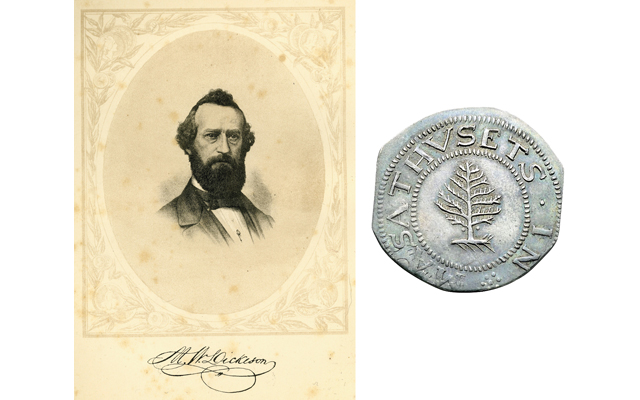 Montroville W. Dickeson, whose book was a sensation in 1859, was a pioneering American numismatist. The 1652 Pine Tree shilling, right, was a favorite in 1859 as well as today.

In the annals of our hobby, 1859 is particularly important. As related last week, Augustus B. Sage cataloged three coin auctions that year. Earlier, auctions had been occasional, often several years elapsing with none at all.

Even more important in 1859, the first large-size book intended for coin collectors was published by Lippincott: the American Numismatical Manual of the Currency or Money of the Aborigines and Colonial, State and United States Coins with Historical and Descriptive Notices of Each Coin or Series. The author was Montroville W. Dickeson, a fascinating man who was a medical doctor, but who spent much time in the West digging into Indian burial mounds, gaining lasting fame among archaeologists for this endeavor. Much could be written about him, including such trivia as that he was owner of the Philadelphia building where Ebenezer Locke Mason Jr. had a coin shop.

The American Numismatical Manual was hardbound, nearly 300 pages, and had embossed illustrations with tints of coinage metal colors. Thousands of copies were sold. In 1860 and 1865 other editions were published, now with American Numismatic Manual instead of Numismatical. The Dickeson manuals were giant steps forward for the hobby.

Dickeson started from scratch in gathering information, or almost. He consulted collectors, dealers, and historians, and drew upon scattered published sources. The Manual contained an incredible amount of useful information.

As a pioneering effort, it also had its faults. Mint marks were not the slightest bit important to any coin collectors at the time, and not even the Mint Cabinet, launched in 1838, bothered to notice them. In passing, Dickeson suggested that a gold coin with the C Mint mark identified it as being struck in California!

In the meantime, rare coins captured the fancy of newspaper and magazine editors who ran many stories about them. By that time the story of the 1652-dated Pine Tree shilling, as given in a romantic tale by Nathaniel Hawthorne in 1841, was well known. Mint master John Hull offered as dowry for his marriageable daughter her weight in such coins. It was no surprise that in 1859 such pieces were highly desired by collectors, and a nice example would fetch several dollars.

In the meantime Mint Director James Ross Snowden was being inundated with requests for Proof coins, patterns, and other key issues. This catalyzed a most remarkable change of direction for the Mint — my subject next week!