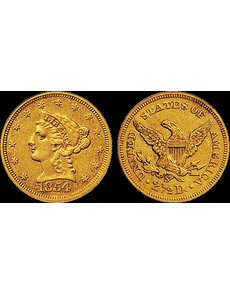 Certified by Professional Coin Grading Service as Secure Very Fine 35, the quarter eagle was one of 4,483 lots of United States, world and ancient numismatic items offered Nov. 6 to 8 in floor sessions by Stack’s Bowers Galleries in conjunction with the Whitman Baltimore Coin and Collectibles Expo.

The 1854-S quarter eagle is one of just 246 $2.50 coins struck during the inaugural year of coinage production at the San Francisco Mint.

Authors Jeff Garrett and Ron Guth write in their 2006 reference Encyclopedia of U.S. Gold Coins 1795-1933 that the 1854-S quarter eagle was unknown in numismatic circles until 1910 when numismatist and author Edgar Adams discovered an example.

The finest known of the 12 confirmed existing 1854-S quarter eagles is an example certified About Uncirculated 53 by Numismatic Guaranty Corp.