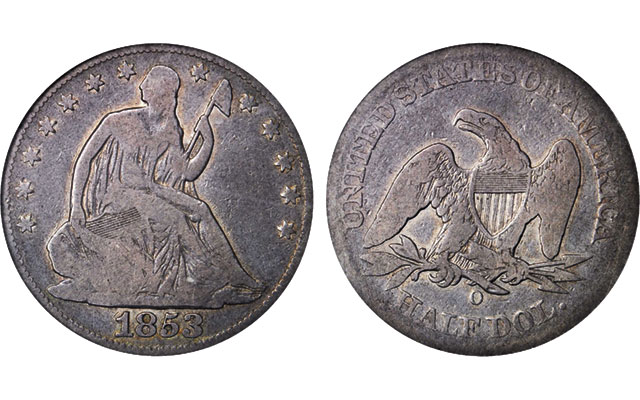 An 1853-O Seated Liberty, Without Arrows and Rays half dollar, one of just four known, will be offered at Stack’s Bowers Galleries’ Oct. 30 sale of “The 1853 Collection.” 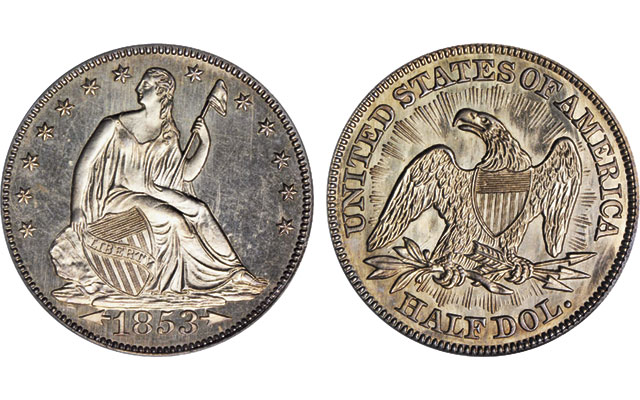 This Proof 1853 Seated Liberty, Arrows and Rays half dollar is one of a handful known and is graded Proof 64, CAC. 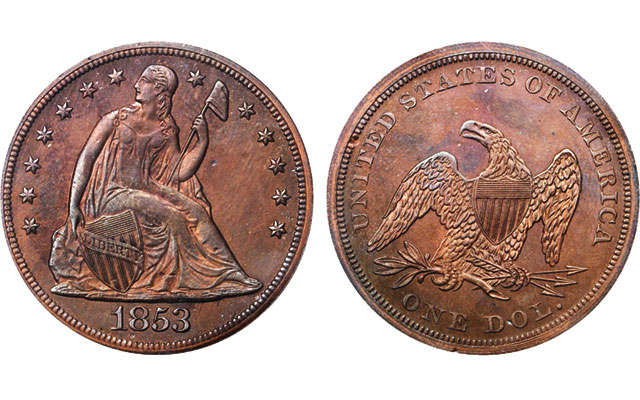 A rare 1853 Seated Liberty dollar pattern in copper may have been struck more than a decade later than the date on it would indicate.

An 1853-O Seated Liberty, Without Arrows and Rays half dollar, one of just four known, is one of the highlights of Stack’s Bowers Galleries Oct. 30 Rarities Night auction at the Whitman Expo in Baltimore.

The Rarities Night sale is one of numerous Stack’s Bowers auction sessions taking place during and immediately after the expo at the Baltimore Convention Center, Oct. 30 to Nov. 2.

The piece is part of an extensive group of 1853 coins consigned to the sale from an anonymous collector described by the auctioneer as “a consummate collector, a gentleman with diverse interests, and a true student of numismatics.” He took it upon himself as a personal challenge “to build his set within the narrowest possible span of dates,” eventually settling on 1853 as it offered an “interesting inclusion of nearly all circulating American denominations, save for the two-cent piece, 20-cent piece and three-dollar gold.”

As his interest grew, the collection expanded to include newspapers, books and other ephemera. The introduction adds, “The more he leaned about the date, the more he saw it in his daily life, and the more rewarding the hunt became as this ‘unremarkable’ year became richly fascinating.”

A landmark rarity from 1853

The 1853-O Seated Liberty, Without Arrows and Rays half dollar, graded Good 6 by Professional Coin Grading Service, has a known ownership history that traces back to 1892 and was last offered at public auction at the Stack’s October 1975 E. Yale Clarke auction.

Stack’s Bowers notes that the issue has proven challenging for even the wealthiest collectors, including Louis E. Eliasberg Sr., who struggled to obtain an example while he was assembling one of the landmark American coin collections.

The description writes, “It is quite remarkable that after decades of aggressive collecting supported by the financial means to compete for anything needed, this coin eluded him until the end” and it was the next to last coin Eliasberg acquired.

When Eliasberg purchased his example in 1950, just three examples of this half dollar were known to collectors. A fourth example surfaced in 2012 and that piece, also graded Very Good 8, sold for $218,500 at Stack’s Bowers’ 2012 American Numismatic Association World’s Fair of Money auction. The finest known example is graded Very Fine 35 and last sold at auction during the Stack’s offering of the George Byers Collection in October 2006, where it brought $368,000.

The present example is called “The King Specimen,” as its first known trip to the auction block was at the Chapman brothers’ April 1892 sale of the Colin E. King Collection.

Proof 1853 Arrows and Rays half dollar

Another highlight from the collection is an 1853 Seated Liberty, Arrows and Rays half dollar graded Proof 64 with a green Certified Acceptance Corp. sticker indicating quality within the grade. The auction firm estimates that just five to eight examples are known in Proof, and the piece in the auction was formerly in the collection of former Rep. Jimmy Hayes, R-La.

Like the 1853-O Seated Liberty, Without Arrows and Rays half dollar, this issue has proven elusive and is missing from many of the notable specialized collections of Seated half dollars in recent memory.

The numismatist who assembled “The 1853 Collection” went beyond regular issue coins, and the collection includes 13 pattern coins. Perhaps the most impressive is an 1853 Seated Liberty dollar struck in copper. It is graded Proof 64 red and brown by PCGS and has a green CAC sticker.

The description notes that the piece was struck by the same dies used to strike a Proof 66 Seated Liberty silver dollar also included in the collection and being offered at the Oct. 30 auction. It adds that “the die is clearly of more modern manufacture than the date on this coin,” suggesting both the Proof 1853 silver dollar and this pattern may have been struck by the Mint a decade later than the 1853 date would indicate.

The rich chocolate brown copper dollar was formerly a part of the Louis E. Eliasberg Sr. Collection, and this piece was offered nearly two decades ago at Bowers and Merena’s 1996 auction of selections from that collection.