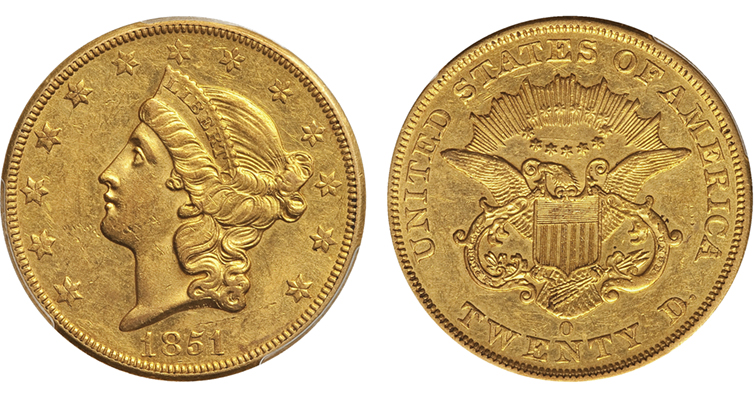 An 1851-O Coronet $20 double eagle switched from an NGC holder to a PCGS holder between its offering in Newman V and a subsequent 2015 Heritage auction.

The Eric P. Newman provenance is one that is a double-edged sword in the marketplace. It’s a positive because, obviously, Newman amassed a great collection. But it is also problematic in that it’s easy to track what a Newman coin sold for when offered at Heritage’s various Newman auctions.

This 1851-O Coronet $20 double eagle was purchased by Newman in the mid-20th century from the estate of “Colonel” E.H.R. Green for $75. When offered at Heritage’s Newman V auction on Nov. 15, 2014, it was graded About Uncirculated 58 by Numismatic Guaranty Corp. with a green Certified Acceptance Corp. sticker indicating quality within the grade and sold for $15,275. After that sale it was sent to Professional Coin Grading Service, which noted the provenance Col. Green-Newman on the slab. Now graded PCGS AU-58 CAC it sold for $17,625 at a Feb. 26, 2015, Heritage auction, representing a modest profit for the winning bidder.

As an issue, the 1851-O double eagle is scarce because many coins from the mintage of 315,000 coins were melted, and high-end About Uncirculated examples are rare.