1848 quarter eagle made of California gold 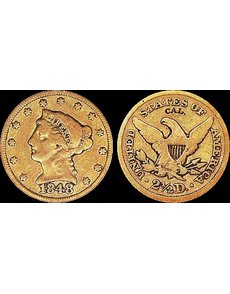 This 1848 Coronet, CAL. quarter eagle, a coin that captures the attention of young numismatist Taylor Webb, realized $25,415 in a January 2011 Heritage auction.

Can you guess what the first commemorative coin produced by the United States is? If you guessed the 1892 World’s Columbian Exposition half dollar, then some people may say you are wrong. They will tell you that in fact it is the 1848 Coronet, CAL. gold quarter eagle. And they may be right in thinking this.

These coins were specially struck from gold that came from the California Gold Rush. They are distinguishable from regular 1848 Coronet quarter eagles by the presence of CAL. stamped into the field above the eagle’s head. The coins were stamped with CAL. after striking, but most likely before they left the coining chamber.

Here’s the story: The military governor of California, Col. Richard Barnes Mason, ordered an officer to collect gold and deliver it to the secretary of war. The officer took the gold nuggets, weighing about 228 ounces, to the White House and then delivered the gold to William L. Marcy, the secretary of war. Marcy then ordered that a portion of the gold be reserved for medals. He ordered the balance to be coined into quarter eagles “bearing a distinguishing mark to be able to distinguish from regular issues.”

It is this phrase that seals its fate as the first commemorative coin. These coins were dated 1848, but they were likely coined in early 1849. A total of 1,389 were struck, according to Mint correspondence. They were available at the Mint for face value for a time. Only a few hundred were sold, and the rest were dumped into circulation. Of the 1,389, PCGS Coin Facts estimates that 162 examples survive today.

These coins have a tangible link to an important event in America, the California Gold Rush. Because of this gold rush, many towns in California were changed forever. San Francisco grew from a small town of about 200 residents to a boomtown of 30,000, almost overnight. Many people died on the journey to California. Some of those who survived the travel went home rich, some went home poor and some never went home. The coin relates to their struggles. The low mintage and survival rate make this coin one of the scarcest issues of this series. These coins are also the first commemorative coin to be produced.

It is coins like these that can keep people involved in the hobby. These coins were made during the Mint’s golden years. Although this coin may bring sky-high prices at auction, it is worth every penny. It is worth far more than the gold in it; it has a story attached to it.

Someday, although I may be young, I will add one of these to my collection.

Taylor Webb is a 12-year-old young numismatist from Fremont, Calif., and a member of the American Numismatic Association.