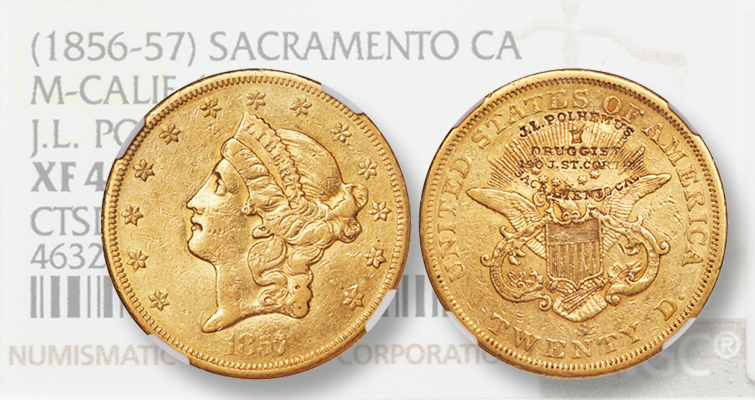 An 1857-S Coronet double eagle carrying the counterstamp of a prominent Sacramento pharmacist is a rare document of the entrepreneurial nature of merchants during the California Gold Rush. It will be offered at Heritage’s November 8 to 11 Signature Auction in Dallas. 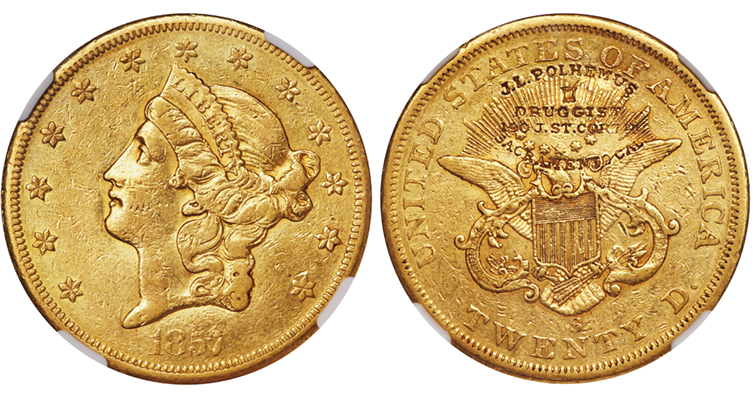 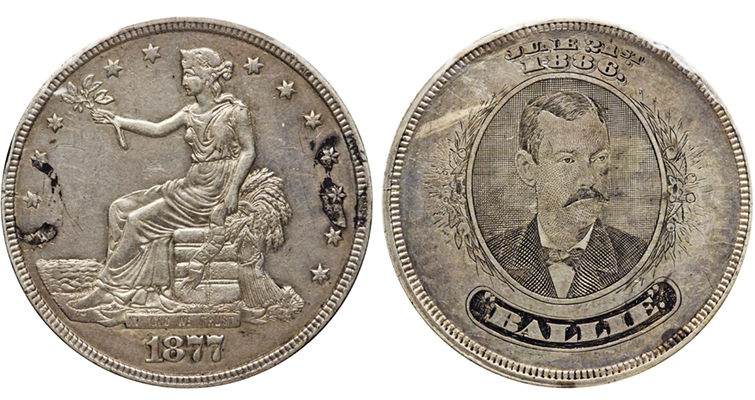 An unusually accomplished engraving on the reverse of this 1877 Trade dollar depicts a portrait of an unknown man in a style more often seen on bank notes than coins.

Two odd coins that were fiddled with after they left the U.S. Mint are among the standout lots at Heritage’s Nov. 8 to 11 Signature Auction at its Dallas headquarters.

Thanks to the discovery of the SS Central America shipwreck, 1857-S Coronet gold $20 double eagles can be found — even in Mint State grades — with relative ease. Heritage is set to offer one graded Extremely Fine 45 by Numismatic Guaranty Corp. that is exceptional since it is counterstamped by the Sacramento druggist James Lozier Polhemus.

The ambitious pharmacist arrived in Sacramento in 1849 during the dawn of the Gold Rush, opening up shop across the street from the Magnolia Saloon and soon moving down the street where he worked until his death in 1866. His wife would continue the business, and in the young, rapidly-developing California, J.H. Polhemus prided himself on being the “oldest established legitimate druggist in the city,” keeping open 24 hours and offering a variety of goods to satisfy the wants and needs of locals.

On his robust business Heritage writes, “All purchases were done on a cash basis, with Polhemus applying his counterstamp on virtually every silver or gold coin that passed through his till.” The mortar and pestle, and curved lettering was used on a variety of silver and gold denominations, but his counterstamps on double eagles are rare.

When previously offered in 1985 at Bowers and Merena’s auction of the Roy H. Van Ormer Collection it was unique, but the SS Central America increased the population by several examples. Heritage explains, “The present coin pre-dates any shipwreck recoveries and it is in original, Choice XF circulated condition from the old West.” One of the SS Central America double eagles carrying the counterstamp was offered at Christie’s for $48,300 nearly two decades ago, providing evidence of the lively market for them.

The counterstamp is neatly and prominently applied and the coin is displayed with the reverse up in the NGC slab, to highlight the valuable counterstamp.

Trade dollars were struck by the U.S. Mint in the 1870s for circulation as a trade coin in Asian countries and they were not typically seen in the United States except by numismatists. When encountered by the public, the novelty of the large coin led many to engrave them, turning them into what are commonly called love tokens. One of the most impressive of these is an engraved 1877 Trade dollar where the reverse was planed off and the eagle is replaced with a portrait of a gentleman, intricately hand-engraved in a bank note style.

Heritage notes, “Black coloration in the recesses adds emphasis around the engraved devices. Lettering includes June 21st / 1886. at the top, and ‘BALLIE.’ in a curved panel at the bottom, framing an oval pictorial rendition of a gentleman. Delicate filigree work surrounds the oval left and right.”

The obverse shows evidence of it once being mounted with a pinback that has since been removed. Heritage grades the host coin Extremely Fine sharpness based on the obverse wear before concluding, “All in all, this is a spectacular piece of numismatic memorabilia with attractive, briefly lustrous surfaces that display traces of gold toning over silver-gray fields; ideal for research, and a centerpiece for any specialized collection.” 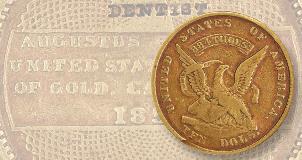 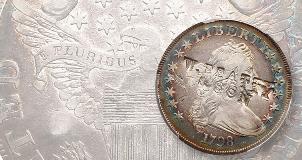 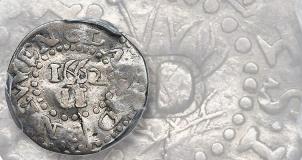