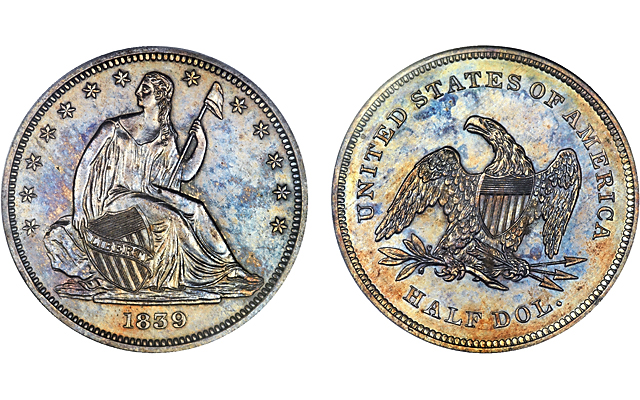 Four of those Proofs are the No Drapery variant, attributed as WB-101 in the Complete Guide to Liberty Seated Half Dollars by Randy Wiley and Bill Bugert.

One of the four WB-101 coins is being offered in Heritage Auctions’ June 23 sale in New York of the Eugene H. Gardner Collection of United States Coins.

The 646-lot auction is slated to be held at the Ukrainian Institute of America at the Fletcher-Sinclair Mansion, 2 E. 79th St., in New York City.

According to Heritage’s auction lot description, Proof examples of the 1839 Seated Liberty half dollar were purportedly struck on Aug. 13, 1839, at the Philadelphia Mint.

All are struck from a reverse die showing an extensive die crack on the lower part of the reverse. Some exhibit a second, bisecting crack by the lowest olive leaf, extending into the R in AMERICA. The Gardner example is believed to be the only example from the five identified Proof 1839 half dollars that does not exhibit the second, bisecting die crack.