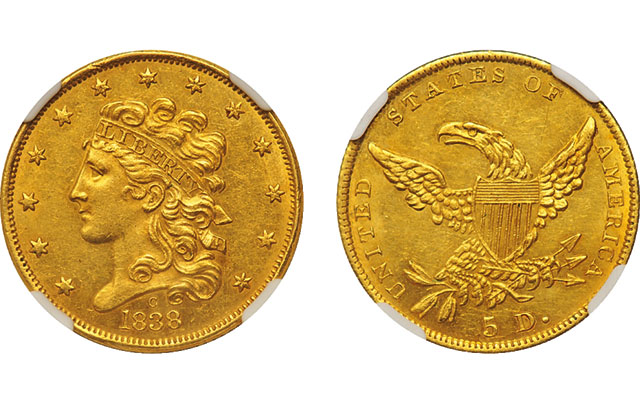 St. Louis auctioneer Scotsman Auction Co. will host its 2014 Collectors’ Auction on Friday, Oct. 17, 2014, in Saint Charles, Mo., at the Saint Charles Convention Center in association with the Silver Dollar and Rare Coin Expo. The auction will start at 5 p.m. Central Standard Time.

As typically seen with Scotsman auctions, the sale encompasses a wide range of numismatic material, including a strong currency section. Among the highlights is an 1838-C Classic Head gold $5 half eagle graded Mint State 60 by Numismatic Guaranty Corp. NGC has graded just two examples finer and the mintage is enticingly low at just 17,179 pieces.  It is estimated at $30,000 to $40,000.

What makes this coin interesting is the story behind it. According to Scotsman, the coin has a known ownership history that begins at the Civil War. The story starts with William Henry Harrison Duff of the 1 Regiment Tennessee Cavalry, Company F. He survived the war and married Naomi Vineyard on Sept. 14, 1865. This coin was the wedding gift from her family.

The coin was then passed down to the consignor, who received the coin from his Aunt Letha Rich Mckenzie in the fall of 1967. She had received it in 1938 when she graduated from nursing school, from her grandmother Naomi Vineyard Duff.

Scotsman adds, “Thus, the coin has been in Col. Rich's family for about 150 years, since the time of the Civil War, and this only adds to the mystique as a Charlotte piece (1838-C gold half-eagle)” before concluding that the sale represents a “once  in a lifetime” opportunity for a lucky collector.

On the coin's condition, the firm writes a detailed analysis, noting, “Obviously, NGC chose not to give a grade at the "choice" level, so further investigation is required to determine what factors may have led to that decision. Magnification reveals a plethora of tiny, feathery hairlines fluttering within both obverse and reverse fields, although there is also evidence of strong die polish which helps confuse matters. Let's just say the coin undoubtedly saw opportunities to get wiped during 176 years of existence.”