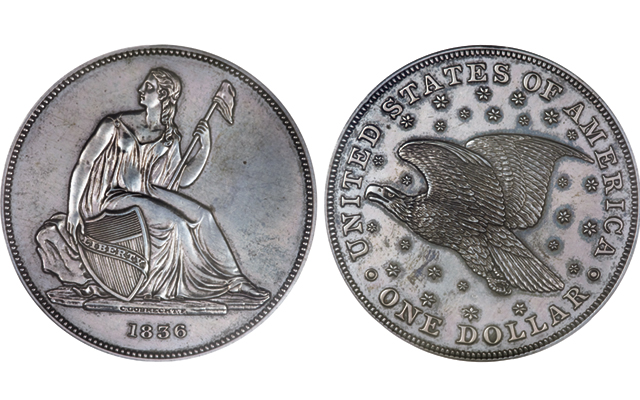 A PCGS Proof 62 1836 Gobrecht, Name on Base dollar was reunited with documentation outlining its provenance after a more than four-year separation.

Several years of numismatic sleuthing by research Len Augsberger helped him to reunite a historical letter found tucked inside a Pennsylvania family’s Bible with an 1836 Gobrecht, Name on Base dollar linked to President Andrew Jackson.

In the Spring 2015 issue of The Gobrecht Journal, a printed periodical from the Liberty Seated Collectors Club, Augsberger outlines the reunion search from beginning to end.

Augsberger begins his story in August 2010 when a Carlisle, Pa., resident going through the contents of her aged mother’s safe-deposit box found the 1836 Gobrecht dollar.

The coin was absent any documentation regarding how the 91-year-old woman had first acquired the piece.

The woman’s daughter and her husband continued to search for information on the coin, resulting in the coin being placed with Hershey, Pa., dealer Rich Uhrich for sale.

The coin was graded and encapsulated Proof 62 by Professional Coin Grading Service, and when it sold, proceeds from the sale were put toward nursing home care for the elderly woman, the coin's now-former owner.

According to Augsberger, a year later, in September 2011, the elderly woman’s daughter continued the safe-deposit box search. Found was an old Bible inscribed by the daughter’s great-great-grandmother, Sarah K. Sevier, born Sarah Knox.

Inside the Bible, a letter dated March 21, 1888, from Sarah to her grandson, Robert Joseph Shields Dunbar Jr., documented the coin’s pedigree and how it came to be in the Sevier family’s possession.

Sarah, whose parents died when she was young, went to live with Jackson and his wife, Rachel, at their home, The Hermitage, in Tennessee.

Sarah explains in the letter to her grandson that the coin, which marked the U.S. Mint’s transition from Capped Bust to Seated Liberty coinage, had been given to his mother by a Maj. R.E.W. Earl, a close friend of Jackson.

Sarah explains it was her belief the coin had been initially presented to Maj. Earl directly by Jackson.

Augsberger writes that using scanned images of the coin from the Carlisle, Pa., family that sold the 1836 Gobrecht dollar, he was able to research the auction archives of Heritage Auctions to trace the coin.

The coin realized $21,861.50 in Heritage’s Jan. 6, 2011, auction. Later in the year, Augsberger contacted Heritage to be put in touch with the buyer of the coin at auction. However, the coin had been resold and the new owner was not interested in selling.

While walking the bourse floor of the Whitman Baltimore Expo in November 2014, Augsberger espied in the display case of dealer Kevin Lipton a PCGS Proof 62 1836 Gobrecht, Name on Base dollar, which Augsberger said he was able to match to the coin sold in the Jan. 6, 2011, Heritage sale.

Through Augsberger’s intervention and perseverance, he was able to broker the sale of the coin back to the daughter who had found the undocumented coin in her mother’s safe-deposit box.

“She has explained the situation clearly to her own children and it is certain they will not find a forgotten Gobrecht in her safety deposit box,” Augsberger writes.