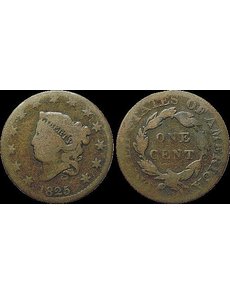 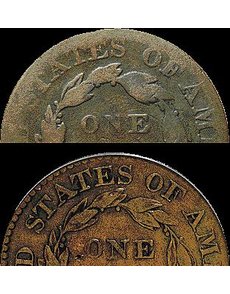 The 1825 Coronet cent Alabama collector Tom Deck acquired in an eBay auction has been tentatively confirmed by three numismatic experts to be a variety whose existence has been questioned for decades.

Several top large cent experts have tentatively verified the discovery by an Alabama collector of what might be a variety of 1825 Coronet cent whose existence has been in dispute for decades since first reported in 1883.

The collector, Tom Deck, says he purchased the heavily circulated coin in an eBay auction the week before Thanksgiving for less than $100. Deck said the coin would likely grade no better than Good 4.

In the eBay auction, the 1825 Coronet cent was attributed as a Newcomb 4 variety (as cataloged in United States Copper Cents 1816-1857 by Howard Newcomb).

The N-4 variety of 1825 Coronet cent represents the marriage of obverse die 4 and reverse die D. For decades, researchers had believed that both dies were used only in the N-4 marriage, and not paired with other dies to create different varieties. However, examination of photographic images of the eBay coin by a trio of large cent experts has tentatively determined Deck’s coin to bear the obverse 4 of the N-4 pairing, but the reverse J of the N-10 variety. If the pairing is confirmed, it would validate a die pairing first reported in print in 1883, but listed as unknown in Newcomb’s 1944 book, with the N-5 catalog designation, and described in a 1992 book by John D. Wright, The Cent Book: 1816-1839, as a “fiction” and one of the 1883 cataloger’s “few mistakes.”

After examining his purchase upon receiving it, Deck gradually became convinced it was a new variety. He submitted extremely high resolution images showing the minutest of details of the obverse and reverse of his new purchase to three top large cent experts — Bob Grellman, John Wright and Mark Borckardt — in an effort to have the coin attributed as a new variety. Grellman is the Region 4 representative for Early American Coppers, a cataloger and conductor of EAC auctions, and is in partnership with Chris McCawley, where, as The Copper Specialists, the two catalog the large cent consignments for Ira & Larry Goldberg, Auctioneers. Wright is a collector for more than five decades, EAC member, and author of the 1992 book mentioned previously. Borckardt is a veteran numismatist and senior cataloger for Heritage Numismatic Auctions.

Grellman, Wright and Borckardt jointly concurred that Deck’s find represents a variety researcher Frank D. Andrews identified in 1883, but that was listed in 1944 by Newcomb as being unknown.

Grellman, Wright, Borckardt and others examined Deck’s find in person Jan. 7 for positive confirmation during the EAC meeting held in conjunction with the Florida United Numismatists convention in Orlando.

What Deck’s coin could possibly be worth as the only known example of the variety is any expert’s guess. Deck said he is perfectly content now to hold onto the coin.

Deck said he received the coin a few days after the eBay sale, and although cursory inspection suggested the coin he received was not as described but possibly misattributed, he stored the coin away for nearly another week before conducting a more detailed examination in early December.

Deck said he had initially shrugged off the fact the coin was not as described because he liked the appearance of the problem-free coin and because the price he paid was consistent with the value of an N-4 1825 variety as it was attributed.

When attributing large cents, Deck said he looks at the reverse first. Deck, who was introduced to collecting in the early 1970s as a youngster by a grandmother, joined EAC in 1997, which sparked his interest in large cents.

Deck said during his more detailed examination of the coin, he noticed a design inconsistency that triggered his suspicion he might have discovered a new large cent variety.

Using two other 1825 Coronet cents from his collection that were in similar condition to his eBay coin — with one of the two being an N-4 cent and the other an N-10 piece — Deck said he made multiple comparisons of the two coins to his eBay coin.

Deck said he compared both the obverses and the reverses of the N-4 and N-10 cents to arrive at the conclusion that the dies used to strike his eBay coin matched the N-4 obverse die and N-10 reverse die. (Since many design details were added individually by hand to the dies the Philadelphia Mint used in the early 19th century, minute differences can seen from die to die. The science of cataloging die varieties is based on identifying these differences.)

“This appears to match Andrews’ description of his A-5 variety, which was delisted as ‘unknown’ by Newcomb,” according to Grellman, though it was still assigned the N-5 catalog number.

In describing his A-5 variety (N-5 in the Newcomb work) of the 1825 Coronet cent, Frank D. Andrews, in the second edition of his Arrangement of United States Copper Cents, published in 1883, stated that the piece had the obverse of the A-4 (N-4) cent and the reverse of A-10 (N-10) cent, according to Deck.

In his 1992 book, Wright stated why it was believed that the A-5/N-5 variety did not exist. “The coin listed by Frank Andrews as his number 5 ... is an early state number [N-]10. The specific coin from which Andrews made his ‘A-5’ listing is a boldly struck number 10, later in the [Willard C.] Blaisdell collection, so the ‘long-listed Andrews 5’ is a fiction — one of Andrews’ few mistakes.”

Deck said that “at some point, the envelopes containing Andrews’ 1825s were discovered. Andrews had an envelope for an 1825 N5, but no coin had ever been in the envelope [based on the lack of any impression of a coin being found in the paper of the envelope], so Andrews probably never owned this variety. How he has a listing for an N5 in his 1883 reference is a mystery.”

Grellman said Andrews wrote the first attribution guide for the large cents of 1816 to 1857, published in 1883, which was expanded upon by Newcomb in 1944 for his large cent reference.

“I have Newcomb’s personal copy of the 1883 Andrews book in which Newcomb penciled in for the Andrews #5 variety of 1825 ‘unknown,’ ” Grellman said. “Andrews’ description of his variety #5 appears to match the new discovery.” ¦