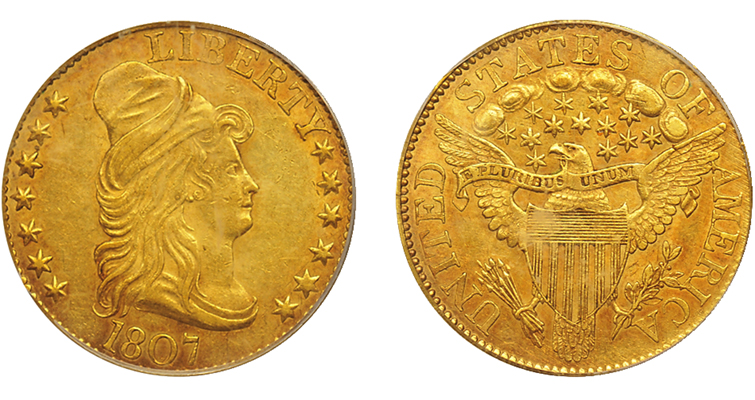 Early U.S. gold is rare, and typically collectors looking for an example are forced to deal with a variety of problems such as cleaning, old repairs, or smoothing to correct Mint-made planchet adjustment marks.

To find one that is relatively problem-free is unusual, and this 1807 Capped Bust, Heraldic Eagle gold $5 half eagle graded Extremely Fine 45 by Professional Coin Grading Service in an older-green label holder is solid for the grade. Scotsman described the coin’s attractive overall looks as follows: “Memorable bronze-gold encircles the stars and even proffers a dash of sky-blue and magenta iridescence when properly captured under ideal lighting, with the majority of each side embraced in royal gold.”

Although it sold solidly within the range of what a choice Extremely Fine example would typically bring, if the photo is any indication, it may be removed from its slab by the winning bidder with the hope of getting an upgrade to the About Uncirculated grade level.