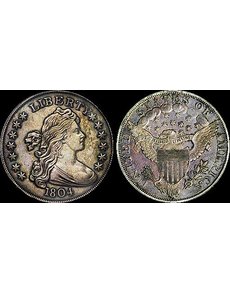 Nearly five years after paying $3,737,500 at auction to buy the Mickley-Reed-Queller specimen of the Class I 1804 Draped Bust silver dollar, the unidentified owner from Greensboro, N.C., has decided to part with the coin.

Certified Proof 62 by Numismatic Guaranty Corp, the 1804 dollar is scheduled to anchor Heritage Auctions’ Aug. 8 and 9 offerings in Rosemont, Ill. Heritage also auctioned the same 1804 dollar on April 17, 2008, when the North Carolina collector acquired the coin, in conjunction with a Central States Numismatic Society Anniversary Convention.

The 1804 dollar will be offered Aug. 8 as part of Platinum Night.

Heritage’s president, Greg Rohan, said April 9 that when the Greensboro collector acquired the Mickley-Reed-Queller 1804 dollar, the purchase was an upgrade for his type set of nongold Proof United States coins.

The collector already owned another 1804 dollar, according to Rohan — a Class III example, sometimes referred to as a second restrike — graded Proof 58 by Professional Coin Grading Service. The collector’s particular Class III example is known as the Adams-Carter specimen.

Rohan said the collector has since been liquidating the coins that comprised his type set of nongold Proof U.S. coins under the Greensboro Collection banner.

The collector has been collecting coins for the past 13 years.

The Greensboro collector’s numismatic holdings that are being liquidated are valued at approximately $30 million, Rohan said. He said those holdings are being sold to help finance future collectibles’ purchases in numismatics, paintings, sculptures and other fields.

The 1804 dollars are divided into three classes: Class I, referred to as originals, of which eight are known; Class II, sometimes referred to as the first restrike coins; and Class III, also known as second restrikes.

Although dated 1804, none of the 1804 dollars were actually struck that calendar year.

The Class I 1804 dollars were struck circa 1834 to 1835 for inclusion in diplomatic presentation sets. Two sets were initially assembled, one for the King of Siam and another for Sultan of Muscat. Two more sets were ordered shortly before the diplomatic mission was scheduled to leave the United States; these sets were intended for Cochin-China (Vietnam) and Japan. The Sultan of Muscat was the first recipient of a set, on Oct. 1, 1835; the King of Siam was presented his set on April 6, 1836. The sets for Cochin-China and Japan apparently were never presented, due to the death of the chief diplomat assigned to the mission, and may have been returned to the State Department.

According to numismatic researchers, the small but growing numismatic community had become aware of the 1804 dollars and their rarity by at least 1842. That was the year Adam Eckfeldt and William E. DuBois published the Manual of Coins of All Nations, including an illustration of an 1804 silver dollar.

The first private American collector to obtain an example was Matthew A. Stickney, who traded for his coin with the Mint in 1843, giving the Mint a gold Immune Columbia token and other pieces in exchange.

Of the eight known Class I coins, six are in collector hands, one is in the collection of the American Numismatic Association and one is in the National Numismatic Collection at the Smithsonian Institution’s Museum of American History.

The Class II 1804 dollar is known by a single example, housed in the National Numismatic Collection. Five examples were believed to have been struck, with “three recalled and melted, and one is presently unaccounted for,” writes Q. David Bowers in The Rare Silver Dollars Dated 1804. Several of these Class II coins were apparently sold to collectors, but then were recovered by the Mint for destruction after unfavorable publicity surfaced.

The sole Class II dollar known to survive is struck with the same obverse die used to strike the Class I coins, married to a different reverse die. It has a plain edge; the Class I and Class III coins all have lettered edges. This sole Class 1804 Draped Bust dollar was struck over an 1857 Shooting taler from Bern, Switzerland. It is believed to have been struck circa 1858; it is held in the National Numismatic Collection of the Smithsonian Institution.

The Class III coins were struck from the same die pair used in making the Class II coins, in the same obverse to reverse orientation. Some, possibly all, of the Class III examples, according to researchers, may have been made in the 1850s as Class II coins and held for later distribution (after being given lettered edges). Other researchers believe that at least some of the Class III coins may have been made as late as the early 1870s. Of the six Class III examples known, three are in private hands; one is in the ANA collection; one is in the National Numismatic Collection; and one is in the collection of the American Numismatic Society.

Pedigrees of the coins

The coin’s provenance can be traced all the way back to Chief U.S. Mint Coiner Adam Eckfeldt. After passing through several hands, Pennsylvania collector Joseph J. Mickley, one of the hobby’s most prominent collectors of the 19th century, is reported to have come into possession of the coin circa 1858. The coin was later sold for $750 as Lot 1676 in W. Eliot Woodward’s October 1867 sale of Mickley’s collection.

After several subsequent owners, the coin ended up circa 1868 in the collection of Massachusetts collector William Sumner Appleton. The Massachusetts Historical Society held ownership of the coin from approximately 1905 through October 1970, when it was sold at auction by Stack’s for $77,500 to an undisclosed Chicago collector.

Texas collector Reed Hawn acquired the coin by private treaty in 1974 through Stack’s for an undisclosed sum. The coin was sold at auction by Stack’s in October 1993 for $475,000 to David Queller. The Queller Family Collection of Silver Dollars held the coin until the Greensboro collector acquired the coin in April 2008.