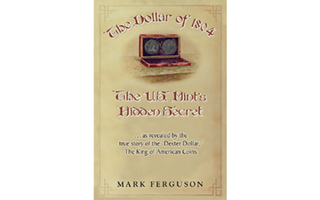 New findings about the famed 1804 Draped Bust dollar will be announced at 6 p.m. Central Time April 24 by numismatist and author Mark Ferguson during the release of his new book, The Dollar of 1804  – The U.S. Mint’s Hidden Secret.

The book release is being held in conjunction with the Central States Numismatic Society's 75th Anniversary Convention at the Renaissance Schaumburg Convention Center in Schaumburg, Ill.

Ferguson plans to exhibit new evidence that he said will dispel age-old myths about the 1804 dollar, “The King of American Coins.” Ferguson's new evidence is from the 1880s and earlier, some signed.

In The Dollar of 1804  – The U.S. Mint’s Hidden Secret,  Ferguson chronicles what he indicates is the true story of the Dexter 1804 Draped Bust dollar and reveals newly discovered facts, not only about the Dexter dollar, but about other 1804 dollars as well.

Ferguson’s research quest began in 1989 with his discovery and acquisition of a work of art, circa 1887, commissioned by James Vila Dexter  in commemoration of the 1804 dollar he purchased in 1885 for a then record price.

Ferguson published limited edition prints of Dexter’s 1887 artwork, and in conjunction with SilverTowne and Numismatic Guaranty Corp., has produced silver replicas of the 1804 dollar that are encapsulated by NGC.

Those in attendance during Ferguson's presentation who register will be entered into a drawing for a package consisting of a limited edition print of James V. Dexter’s 1887 work of art, an autographed copy of the new book, an 1804 silver dollar replica encapsulated by NGC and other bonuses, together valued at $495.

Interested persons who are unable to attend may register online at www.1804Dollar.com for a drawing of an autographed book and an NGC-encapsulated replica of the 1804 dollar valued at $99. Ferguson will also be signing books at the CSNS book-signing table at noon on April 25 and 26.