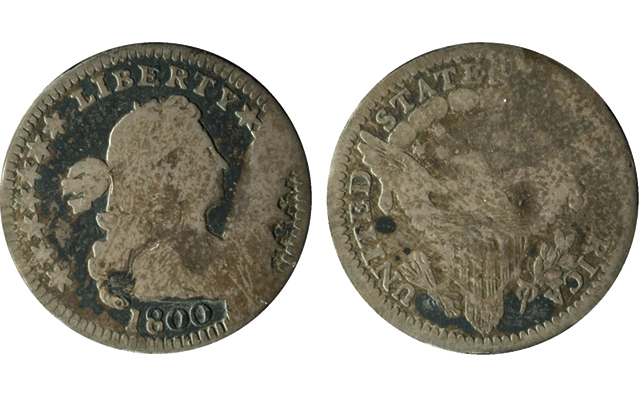 The sale was held in conjunction with the Aug. 5 to 8 American Numismatic Association World’s Fair of Money in Rosemont, Ill.

The coin is attributed as Logan-McCloskey 2 in Russell J. Logan and John W. McCloskey’s Federal Half Dimes 1792-1837. It is graded Very Good 8 by Professional Coin Grading Service and has a green sticker from the Certified Acceptance Corp.

A cud represents a die break where a piece of the die may break out from the die or be retained. In the case of the broken piece falling out, planchet metal will flow into the void, creating a featureless blob.

According to numismatist Jim Matthews, the 1800 LM-2 variety “exhibits catastrophic obverse die damage prior to striking this coin which would fall under the rim to rim cud definition, which is the rarest form of cud found on coinage.”

“A flake or piece of the die fell off, perhaps because of a lamination that detached or from significant impact to the obverse side from a foreign piece of metal that was struck from the die during coinage,” according to Matthews. “Of the eight to 10 known examples from this die pairing, this is the only example to exhibit this unique rim to rim cud or any hint of its appearance on the known examples.”

Perkins’ 2014 ANA Extraordinary Half Dime Sale Part II had 19 lots total, of which two were Draped Bust half dimes and the balance Capped Bust half dimes. The sealed-bid sale in general had the rarer die marriages, late die states and cuds, better pedigreed coins, and plate coins illustrated in the Logan-McCloskey reference.

The sale, in which 17 of the 19 coins offered were reported sold, realized $64,622.64. The buyer’s fee was 15 percent. Bids, according to Perkins, were reduced to 10 percent over the next highest bid, or the reserve. The total of all of the high bids before the bid reductions was $67,828.

Other highlights from the sale included:

Perkins can be reached via email.