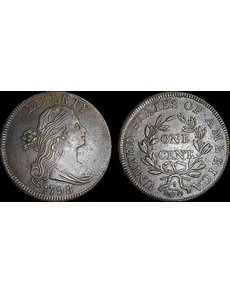 A genuine 1798 Draped Bust cent in Extremely Fine condition should weigh no less than 10.5 grams, but this deceptive cast copy weighs 9.59 grams, 1.3 grams below the normal weight. 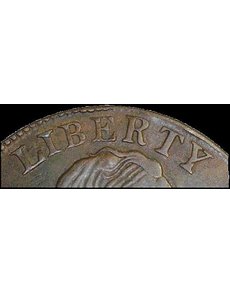 The letters RTY in LIBERTY show signs of having been retooled as they appear stronger in detail than the remaining letters. 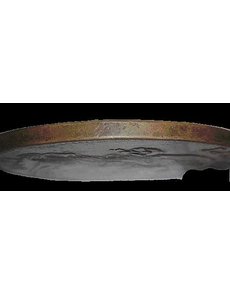 The edge on the fake 1798 Draped Bust cent is sharper and more squared off than it should be, and exudes an unusual “sheen.”

This month’s counterfeit is a rather deceptive cast copy of a 1798 Draped Bust cent.

The genuine coin used to produce the casting molds was a higher grade piece, from the Sheldon 158 die marriage (Penny Whimsy by William H. Sheldon).

The surfaces and color of the counterfeit are good enough to fool many collectors, especially if they do not have access to an accurate scale.

Upon closer examination, this counterfeit does have some defects that can be used for detection.

The edge of the fake is very odd when compared to a genuine coin ­— it is sharper and more squared-off than it should be, and it has an unusual “sheen.”

We were unable to locate any type of a seam on the edge or the rims of the coin, showing that the casting process was quite sophisticated.

The RTY in LIBERTY appears to have been reworked, as these three letters are much stronger than they should be. It is possible that the genuine “model coin” had some damage or corrosion in this area, which was corrected by the counterfeiter. It is also possible that the genuine coin had a repair in this area that transferred over to the cast copy.

A genuine large cent from this time period typically weighs 10.89 grams, so our piece is 1.3 grams light, which is a difference of approximately 12 percent. A genuine 1798 Draped Bust cent in Extremely Fine condition will rarely weigh less than 10.5 grams, so this is a significant difference.

I would only expect an early large cent to lose this much weight if the coin was heavily worn or heavily corroded, which is obviously not the case here.

I would appreciate hearing from any early copper specialist that has additional information on this piece or the genuine coin that the fake was copied from.