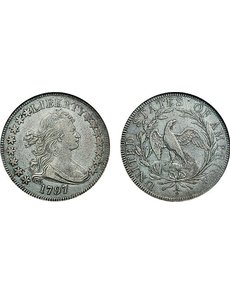 The coin is attributed as the Overton 101a variety in Early Half Dollar Varieties: 1794-1836 by Al C. Overton and Donald Parsley.

The 3,896-lot auction was held in conjunction with the Whitman Philadelphia Coin & Collectibles Expo.

The auction brought preliminary total prices realized of $4.5 million, with 88.5 percent of the lots reported sold. The prices realized include the 15 percent buyer’s fee added to the final closing hammer price of each lot won.

For additional information, contact Stack’s Bowers Galleries on the East Coast toll free at 800-566-2580 or on the West Coast at 800-458-4646. Email the firm at info@stacksbowers.com or visit the company’s website at www.stacksbowers.com.