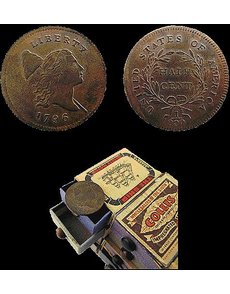 What has been identified as a 1796 Liberty Cap, With Pole half cent discovered in a homemade coin cabinet that was fashioned five decades ago from matchboxes will cross the auction block Jan. 22 with Woolley & Wallis in Salisbury, Wiltshire, England.

The coin is attributed as the Cohen 2 variety as described by Roger S. Cohen Jr. in his book, American Half Cents: The “Little Half Sisters,” a reference about the series.

Details of the sale in which the coin will be offered can be found online at www.woolleyandwallis.co.uk.

While the official mintage reported for 1796 reflects an output of 115,480 coins, currently accepted research indicates only 1,390 half cents were struck with the 1796 date.

On the initial 1796 obverse die, Liberty’s cap hovered behind her head without a pole, but the die broke before striking many coins and the With Pole replacement was introduced.

Fewer than 20 examples of the With Pole variety have been certified in all grades by Numismatic Guaranty Corp. and Professional Coin Grading Service.

According to Woolley & Wallis, the half cent being offered at auction Jan. 22 was discovered in a collection of coins housed in a homemade cabinet of decorated matchboxes glued together by English schoolboy Mark Hillary more than 50 years ago. The coin cabinet and its contents remained forgotten at the back of a cupboard after he died at the early age of 20 in 1963 in a climbing accident in Greece.

Daniel Fearon, a coin consultant for Woolley & Wallis, said a relative of Hillary’s brought the matchbox cabinet of coins in, and on first inspection not much appeared to be of interest, but then the one coin “jumped out.” ¦