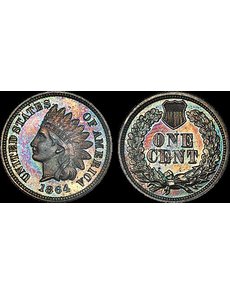 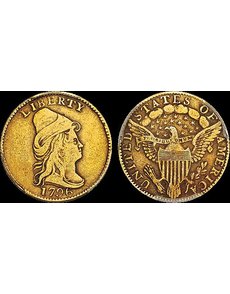 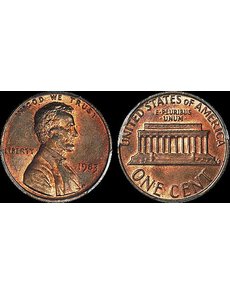 This PCGS MS-62 1983 Lincoln cent which brought $23,500 was struck on a copper planchet instead of the intended copper-plated zinc

The coin was one of 2,312 lots offered in four floor sessions in conjunction with the Money Show of the Southwest.

The auction brought total prices realized of $8,382,609, which includes the 17.5 percent buyer’s fee added to the hammer price of each lot won. Of the lots offered, 97.8 percent sold, according to Heritage officials.

The coin in the auction is the Bass-Dannreuther 1, Extended Arrows variety, as cataloged in Early U.S. Gold Coin Varieties: A Study of Die States, 1795-1834 by John W. Dannreuther and Harry W. Bass Jr. The BD-1 variety is distinguished from the only other variety of the 1796 No Stars subtype by the reverse arrows extending to the left foot of the I in UNITED.

On the 1796 BD-2 variety, the arrows extend only to the right upright of the N.

“No exact mintage figure can be given for the two varieties of 1796 No Stars, despite the existence of two deliveries of 66 coins and 897 coins that some have equated to the two varieties,” according to the Heritage Auctions’ lot description, “But some of the 432 coins delivered in January 1797 could have been of the 1796 No Stars rather than the 1796 With Stars; or, as Bass [and] Dannreuther point out, some of the 897 coins could have been the With Stars variety, so that fewer than 963 of the No Stars varieties were struck.”

The BD-3 variety for the date is of the other subtype; the 1796 Capped Bust, With Stars quarter eagle bears 16 six-pointed stars on the obverse — eight to the left of Liberty’s portrait, eight to the right. The 16 stars reflect Tennessee’s admission to the Union June 1, 1796, as the nation’s 16th state.

Also in the Heritage auction, a 1983 Lincoln cent struck on a copper planchet realized $23,500.

Certified PCGS Mint State 62 red and brown, the 1983 cent is struck on a copper-planchet left over from the 1982 composition transitional year.

The 1983 cent could have been struck at either the Philadelphia Mint or the San Francisco Mint since both facilities struck cents without a Mint mark. Presumably the coin was struck on a planchet leftover from 1982, possibly one that was stuck in a steel tote cart and subsequently dislodged before being fed into a coinage press.

Heritage’s auction also included one of 10 known examples of an 1864 Indian Head, With L on Ribbon cent bronze restrike. The piece sold for $44,062.50.

The coin is certified Proof 64 brown by Numismatic Guaranty Corp. It is cataloged as Snow PR2 in A Guide Book of Flying Eagle and Indian Head Cents by Richard Snow.

Researchers believe the number of Proof 1864 Indian Head, L on Ribbon cents to be more than the reported mintage of 20 coins, since approximately that number are confirmed extant.

According to Snow: “By 1869, the coin was in demand enough to warrant someone at the Mint to strike additional pieces. This was probably done by Mint Assayer William DuBois, who worked as curator of the Mint Collection. An additional 10 specimens were struck using a refurbished obverse die and the regular proof Shallow N reverse die from the 1868-1871 period.”