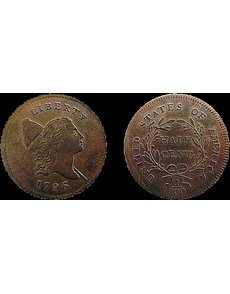 The price paid by Numismatic Financial Corp., of Winter Springs, Fla., is nearly seven times the estimate by the auctioneer, Woolley & Wallis in Salisbury, Wiltshire, England.

The final sale price, which includes a 22 percent buyer’s fee plus value-added tax, appears to be the highest price paid at public auction for a 1796 Liberty Cap, With Pole half cent, and the second highest auction price for any U.S. half cent.

The auction record, $506,000, belongs to the May 1996 sale of the Eliasberg 1796 Liberty Cap, No Pole half cent by Auctions by Bowers and Merena Inc. in cooperation with Stack’s. The auction catalog identified the condition of that coin as “Mint State 65 or better, red and brown.”

The With Pole coin from the Woolley & Wallis auction is attributed as the Cohen 2 variety, as described by Roger S. Cohen Jr. in his book, American Half Cents: The “Little Half Sisters,” a reference about the series.

The coin, which was not certified by a third-party grading service, was described in the Woolley & Wallis catalog listing as grading Extremely Fine.

Numismatic Financial Corp.’s Tim Carroll said Jan. 23 that the firm had no immediate plans for reselling the coin. Carroll said he plans to submit the coin to either Professional Coin Grading Service or Numismatic Guaranty Corp. for certification. Carroll believes the coin to grade MS-66 red and brown.

Carroll said he also purchased for $572 the homemade coin cabinet in which the coin was found, since it is part of the coin’s story (the lot also contained some “junk foreign coins,” according to Numismatic Financial Corp.).

According to Woolley & Wallis, the half cent sold Jan. 22 was discovered in a collection of coins housed in a homemade cabinet of decorated matchboxes glued together by English schoolboy Mark Hillary more than 50 years ago. The coin cabinet and its contents remained forgotten at the back of a cupboard after he died at the early age of 20 in 1963 in a climbing accident in Greece.

Currently accepted research indicates 1,390 half cents were struck with the 1796 date. On the initial 1796 obverse die, Liberty’s cap hovered behind her head without a pole, but the die broke before striking many coins, and the With Pole replacement was introduced. ¦