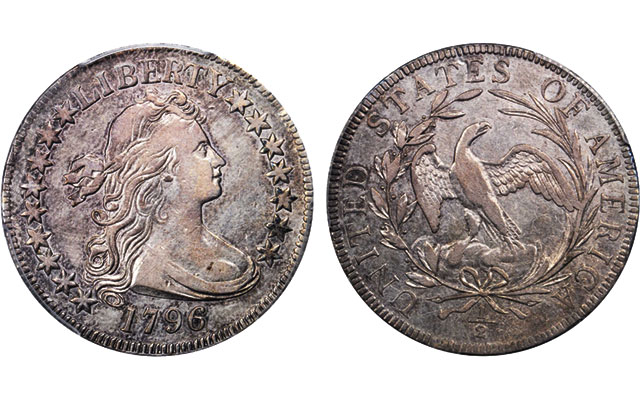 The prices realized includes the 17.5 percent buyer's fee added to the final closing hammer price of each lot won.

The 1796 Draped Bust, Small Eagle, 16 Stars half dollar, graded Very Fine 35 by Professional Coin Grading Service, brought $141,000. The coin is attributed as the Overton 102 variety as cataloged in the fifth edition of Early Half Dollar Die Varieties 1794-1836 by Donald Parsley, expanded and revised from the original work by Al C. Overton.

According to the auctin lot descrioption, the coin was "struck from a late state of this die marriage, with myriad fine cracks on the obverse and a bolder reverse crack from the border at the letter R in AMERICA."

The example offered and sold by Stack's Bowers is graded NGC MS-65 and stickered by Certified Acceptance Corp. The coin brought $34,662.50.

The Dahlonega Mint gold dollar from 1861 is the only circulating coin of any type or denomination whose production took place completely under the auspices of the Confederate States of America. Two sets of dies were shipped from the Philadelphia Mint to the Dahlonega facility in December 1860. On Jan. 19, 1861, Georgia became the fifth state to secede from the Union.

According to the auctin lot description, "It is estimated that somewhere between 1,000 and 1,500 gold dollars were struck from a single die pair. Curiously, the obverse die was re-purposed from the 1860-D issue and shows the tell-tale weak U in UNITED."

The date appears on the reverse of all Coronet and Indian Head gold dollars.

The 1855 Wass, Molitor & Co., Small Head $20 pioneer gold coin is of the Kagin 7 variety as cataloged in Private Gold Coins and Patterns of the United States by Donald H. Kagin.

In 1855, the $20 coin was produced in two subtypes, one with a large head of Liberty and one with a small head, evidently taken from a die punch intended for the $10 coins, according to the auction lot description.