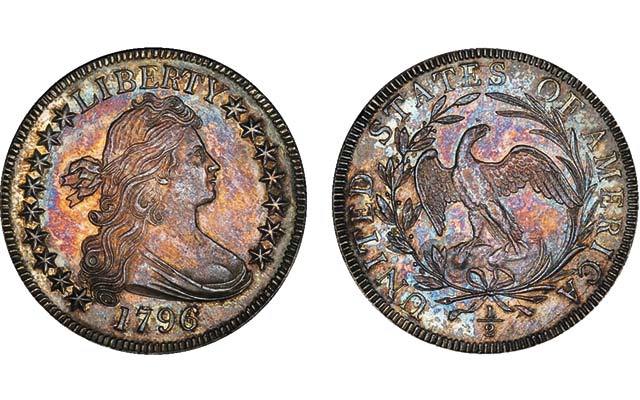 The following contribution by W. David Perkins to the Feb. 22 edition of the John Reich Collectors Society's e-newsletter JR News is used with the author's permission. Perkins, a specialist in early U.S. coins, is a collector and dealer from Colorado. The coin about which he writes is among those to be offered May 19 to 20 In New York City by Stack's Bowers Galleries, in conjunction with Sotheby's, in the first of multiple auctions over the next two years from the D. Brent Pogue Collection:

This week I received my copy of Q. David Bowers new book, Treasures from the D. Brent Pogue Rare Coin Cabinet / A National Legacy. The book highlights 100 of the rarest coins from the Pogue Collection. The book is formatted with one coin for every two pages, with additional enlarged photos of the obverse and reverse for select coins. The coins were numbered 1-100 in the book.

In November 1995 I received my copy of an auction catalog titled, “Numisma ’95 / Numismatic Rarities for the Collector.” Numisma ’95 was a public auction sale held jointly by David W. Akers, Rarcoa Inc. and Stack’s Rare Coins.  Stack’s offered Lots 1001-1751 in Session 1 of the sale on November 29, 1995. Among the Stack’s offerings were a number of coins from the Leland Rogers Collection. I reviewed my copy of the Numisma ‘95 sale catalog this week.  Unfortunately, at the time of the sale I was unable to view the lots in person.

In 1995 my research and collecting interests were focused primarily on the early U.S. Silver Dollars 1794-1803. I highlighted (marked the pages with “post it notes”) three lots in this sale. Interestingly, two of the three lots I had highlighted were Draped Bust half dollars, both ex. Leland Rogers. One was a stunning Gem 1796 16 Stars Obverse Half Dollar (O-102) and the other a magnificent Gem 1797 Half Dollar (O-101a).  I can’t imagine a nicer pair of 1796 and 1797 half dollars.

The third highlighted coin was Rogers’ beautifully toned Gem 1794 silver dollar, [second coin illustrated] ex. F.C.C. Boyd and The World’s Greatest Collection, Lot 1. It is graded PCGS MS66+ today. I eventually had the opportunity to view and study this exceptional specimen a couple of years ago. Most consider it today to be one of the finest known 1794 Dollars.  I sure do.

“Mr. 1796” (John Whitney Walter) purchased this 1796 Half Dollar from the Numisma ‘95 Sale. On May 4, 1999, Stack’s offered for sale this specimen as Lot 1778 in the Public Auction Sale “Mr. 1796” The John Whitney Walter Collection / The coins of 1796. I traveled to NYC to attend this sale. I was finally able to view the Rogers-Whitney 1796 Half Dollar in person. And view it I did. I recall that I studied this 1796 half dollar for nearly a half an hour!  To me this is always the sign of a truly great coin, regardless of the grade – you just want to keep looking at it!

I’ve been told that the Leland Rogers 1797 Half Dollar is even nicer!  It is graded PCGS MS66, and is coin “Number 6” in the new Bowers book. Those who like late die states will especially enjoy the shattered reverse.