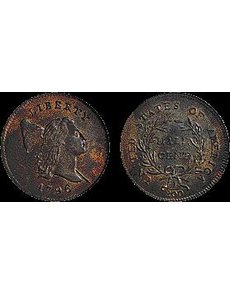 The 1796 Liberty Cap, With Pole half cent, Cohen 2, in the Werner Family Collection is certified and graded Mint State 64 brown by PCGS and bears a CAC sticker. 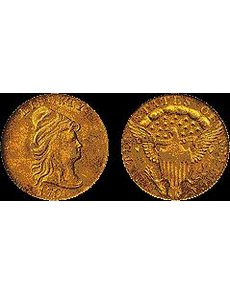 The 1796 Capped Bust, No Stars gold $2.50 quarter eagle designs were in use for only a few months before stars were added to the obverse design. The example shown is graded PCGS Mint State 61 and bears a CAC sticker.

The Werner Family Collection of 1796 Coinage will cross the auction block in Stack’s Bowers Galleries Aug. 4 to 12 sale held in conjunction with the American Numismatic Association World’s Fair of Money in Philadelphia.

The patriarch who built the Werner Family Collection began assembling the collection of 1796 U.S. coins in 2006, soon after his Old West Collection, of gold $5 half eagles and $10 eagles struck at the Carson City Mint in Nevada, was auctioned by American Numismatic Rarities at the ANA World’s Fair of Money.

The first acquisition for the Werner Family Collection was a 1796 Capped Bust, No Stars on Obverse gold $2.50 quarter eagle graded Mint State 61 by Professional Coin Grading Service and stickered by Certified Acceptance Corp. The coin, illustrated on the opposite page, is the Bass-Dannreuther 1-B variety (Early U.S. Gold Coin Varieties: A Study of Die States, 1795–1834 by Harry W. Bass Jr. and John W. Dannreuther).

The CAC sticker means the coin has been verified by CAC’s numismatic experts as meeting the standard for strict quality within its grade.

The year 1796 was the inaugural year for the quarter eagle denomination, and the No Stars on Obverse type was struck for only a few months before 13 stars were added to the obverse design.

The reason for the absence of stars is not known, but numismatic researcher Q. David Bowers suggests that as the design had 13 stars on the reverse, it might have been considered redundant to also display stars on the obverse.

Whatever the reasoning, stars were indeed added later in the year, giving 13 on both obverse and reverse.

As the West Coast collector researched the 1796 date, he quickly learned that the year held more unique and first-year issues than any other year, according to Stack’s Bowers Galleries. For the past six years, the collector focused on coins dated 1796 for him and his family to enjoy.

The collector’s numismatic interests were originally sparked in the 1950s and 1960s by his father, who would go to a local bank and pick up rolls of change from which to assemble sets of Indian Head cents, Indian Head 5-cent coins, and Winged Liberty Head dimes.

The collector soon began to put together his own collections of Winged Liberty Head dimes, along with Jefferson, Wartime Alloy 5-cent coins. Beginning in the 1990s, the collector graduated to collecting the Carson City Mint series, acquiring half eagles and eagles, before parting with the coins at the 2006 auction and moving on to the 1796 issues.

The 1796 issues to be offered, in addition to the Capped Bust, No Stars quarter eagle, are:

The catalog presentation for the Werner Family Collection will be accompanied by a historical overview of coinage of the year.