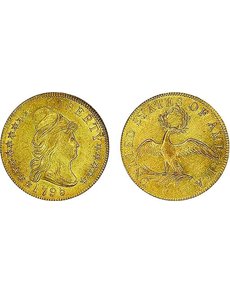 U.S. Postal Service investigators and the FBI are probing the alleged disappearance from the mail stream of a 1795 Capped Bust, Small Eagle, 9 Leaves gold $10 eagle that sold for $379,500 in New York in an auction conducted by Spink Smythe.

The coin, graded Mint State 61 by Professional Coin Grading Service, went missing sometime after Spink Smythe shipped the coin to its new owner by registered mail on May 16. The coin has PCGS certification number 19335299.

Matt Orsini from Spink Smythe (www.smytheonline.com) said June 28 that the package containing the coin was traced to the post office in Western Springs, Ill., west of Chicago, but was not able to be traced further. Orsini declined to disclose the coin’s intended final destination.

Orsini said Spink Smythe filed a claim for the missing coin with the U.S. Postal Service after the coin failed to arrive at its intended destination. Orsini told Coin World June 29 that the FBI is now involved in the investigation.

Agapi Doulaveris, spokesperson in Arlington, Va., for the USPS Office of Inspector General, confirmed June 29 that the USPSOIG is aware of the missing coin. She said investigators are determining whether the case is to be handled by investigators with the U.S. Postal Inspection Service or the USPSOIG, depending on whether the theft is considered to be internal or external.

The coin’s disappearance was also reported to the Numismatic Crimes Information Center (www.numismaticcrimes.org).