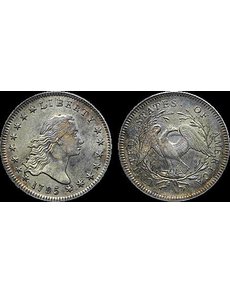 The coin has a Small Eagle, 16 Berries, Two Leaves reverse (the latter meaning that two leaves extend upward from the branches directly under the eagle’s wings; other reverses exhibit three leaves in the same locations).

What makes the coin most distinctive, however, is a silver plug positioned roughly at the center of the coin, marked by a faint outline around the plug on both sides of the coin.

Silver plugs inserted into silver dollars had been noted by numismatists as early as 1885, according to the auction catalog, but for about a century, catalogers aware of the distinction were reluctant to mention the fact since the word “plugged” can have a derogatory meaning (suggesting a hole was filled in post-minting to repair damage, something seen on various damaged coins in the marketplace).

In recent years researchers determined that, for certain early silver coins, notably among half dollars and dollars, some plugs appeared to have been inserted before striking since the plugged areas bear the designs of the dies. Numismatists speculate that Philadelphia Mint employees apparently would drill a hole into an underweight planchet and insert a slightly larger silver plug that would raise the planchet to its legal weight, and that when struck would spread out and become part of the coin. (Similarly, Mint employees used files to scrape away excess silver on overweight planchets to bring them to their legal weight, leaving behind what numismatists call “adjustment marks.”)

The example in the Goldberg auction is graded About Uncirculated 55 by Professional Coin Grading Service and is encapsulated in a Secure Plus holder; it also bears a Certified Acceptance Corp. sticker.

The coin was sold in Lyman Low’s June 1885 auction, in which Low noted the plug obliquely. The coin most recently rested in the collection of Dr. Robert D. Hesselgesser, who consigned the collection to the auction house.

The same Goldberg auction also offers the Gerald Forsythe Collection of Hawaiian Coins, featuring pattern, Proof and other coins struck for Hawaii during the 19th century.

The auction will be held at the Goldberg offices, located at 11400 W. Olympic Blvd., Suite 800, Los Angeles, CA 90064. It precedes the Long Beach Coin, Stamp & Collectibles Expo, held in nearby Long Beach, Calif.

The catalog for the auction is available online at www.goldbergcoins.com. ¦