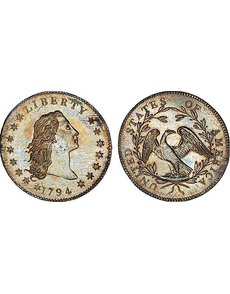 A 1794 Flowing Hair silver dollar became the first coin to sell at public auction above the $10 million barrier.

Bidding for the 1794 Flowing Hair dollar reportedly opened at $2.2 million. After bidding reached $5.5 million with increasing bidding increments, Laura Sperber, a principal of Legend Numismatics and present in the auction room, raised the hammer price to $8.525 million in a single increment, knocking out all other bidding competition (and ensuring that the coin would breach the $10 million level).

Certified as Specimen 66 by Professional Coin Grading Service and wearing a green sticker from Certified Acceptance Corp., the 1794 Flowing Hair silver dollar was part of the Cardinal Collection. It is the only 1794 silver dollar with a silver plug, among some 140 to 150 examples of the 1794 dollar known to exist, according to Martin Logies, who built the collection. Logies is a numismatic researcher, early dollar specialist and author of The Flowing Hair Silver Dollars of 1794.

In total, 1,758 silver dollars (out of about maybe 2,000 struck), all struck on a hand-turned screw press at the Philadelphia Mint facility on Oct. 15, 1794, were delivered after the only day of production for dollars that year. ¦