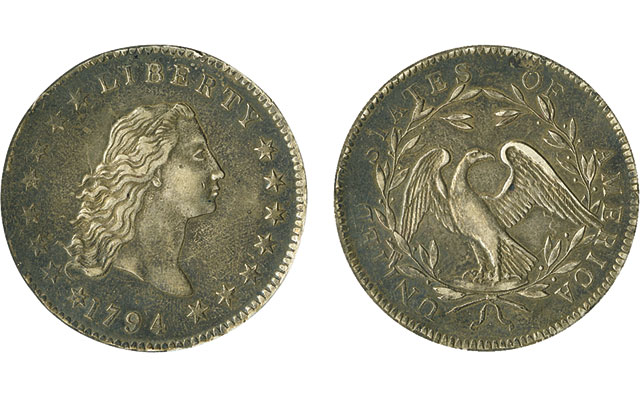 Graded About Uncirculated 50 by Numismatic Guaranty Corp. and stickered by Certified Acceptance Corp., this 1794 Flowing Hair silver dollar from England sold Jan. 27 in New York by Spink for $437,100.

A 1794 Flowing Hair silver dollar that reportedly had been kept as a talisman from D-Day to Berlin realized $437,100 in Spink's Jan. 27 auction in New York.

The coin is graded and encapsulated About Uncirculated 50 by Numismatic Guaranty Corp. and stickered by Certified Acceptance Corp.

Spink officials indicated the coin had been in possession of a British family for nearly 70 years, whose members brought the coin to a Spink valuation day in England in 2014.