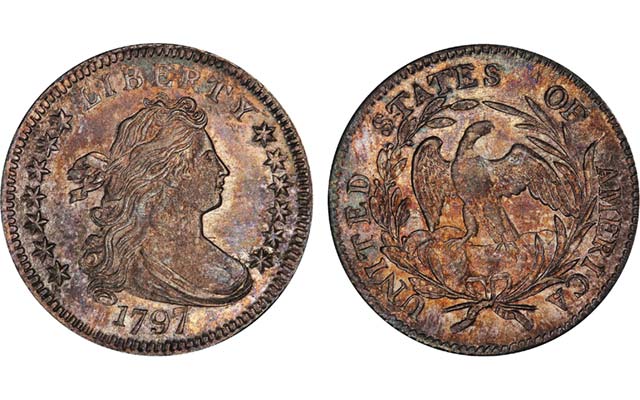 While the coin itself is impressive as one of just two such graded coins of this issue at PCGS with none finer, it has also served as a plate coin for several references in the field and has a noteworthy ownership history.

Before 1887 it was in the Thomas Cleneay Collection and was sold in 1890 as part of S. Hudson and Henry Chapman’s sale of that collection to an unknown buyer. It appeared in B. Max Mehl’s 1946 auction of the William Cutler Atwater Collection and in 1966 sold at a Lester Merkin sale for $7,250. In 1980 Stack’s offered it as part of the Charles Kahn Collection and Stack’s again sold it in 1990 for $26,000 at the Allen F. Lovejoy auction. It passed through more hands before being purchased by Pogue at Heritage’s sale of the Ed Price Collection in July 2008 where, graded NGC MS-65, it brought $402,500, proving that in even the greatest collections, not all coins appreciate in value between auctions.