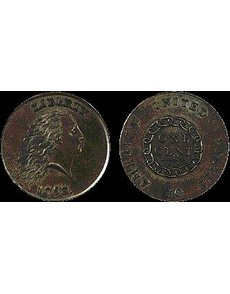 This 1793 Flowing Hair, Chain, Periods cent, graded Mint State 65 brown, sold for $1,380,000 on Jan. 4 during Heritage Auctions first Platinum Night session. The price is a record for any cent. 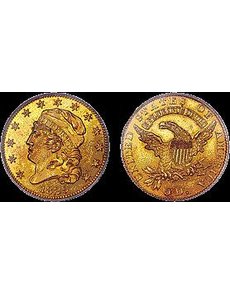 Two early United States coins with provenances that trace them back to legendary collections broke the million dollar barrier when they crossed the auction block in Orlando, Fla., during an auction at the Florida United Numismatists convention.

The Flowing Hair, Chain cent’s price now makes it the most expensive cent sold at auction, breaking the record set in 2009 when the finest known 1795 Liberty Cap, Reeded Edge cent, sold for $1,265,000 as part of the Dan Holmes Collection of large cents.

The Chain cent sold in the auction is the Sheldon 4 variety, as cataloged in William H. Sheldon’s Penny Whimsey. The Liberty Cap, Reeded Edge cent is cataloged as Sheldon 79.

The record-setting Chain cent is the second finest known of the variety — the finest being an example graded Specimen 67 brown — and carries a provenance that traces back to W. Elliot Woodward’s Fifth Semi-Annual Sale in October 1864. The coin was sold at auction in 1996 by Bowers and Merena as part of the Louis E. Eliasberg Sr. Collection where it realized $132,000, and again in 2004 in an American Numismatic Rarities auction where it brought $391,000 — then a record for any cent sold at auction.

The 1829 Capped Head $5 half eagle also has a lengthy provenance, tracing back to the Joseph J. Mickley Collection in the mid-19th century. It was later part of the John Work Garrett Collection, where it was cataloged in its 1979 auction appearance as a Mint State piece, with the comment, “quite possibly this piece was struck as a Proof; it is definitely a special striking, perhaps a presentation piece.”

It was last sold at auction by Superior in 1996 as part of the Michael I. Keaston Collection, where it realized $190,000.

The Heritage catalog entry noted that the offered example is the only certified Proof of the entire type, although a one-sided Proof example is included in the Harry Bass Collection.

Possibly more important than the success of the handful of top rarities, the expanding “middle-market” for very expensive coins bodes well for the future of the rare coin market in that it shows added depth and demand.

Also broadening is the notion of what a million dollar coin can be. No longer is the status reserved for top rarities like 1804 Draped Bust dollars, 1913 Liberty 5-cent coins, 1927-D Saint-Gardens gold $20 double eagles or 1894-S Barber dimes. Today’s well-heeled collectors and investors are expanding their horizons and looking at early rarities in top condition levels as stores of wealth.

Perhaps the recent announcement that the unique 1787 Brasher doubloon with New York metalsmith Ephraim Brusher’s EB counterstamp punched on the eagle’s breast sold in a private transaction for $7.395 million added to bidder confidence that early U.S. coins are a store of value and worthy of bids far exceeding their last trips to the auction block. ¦