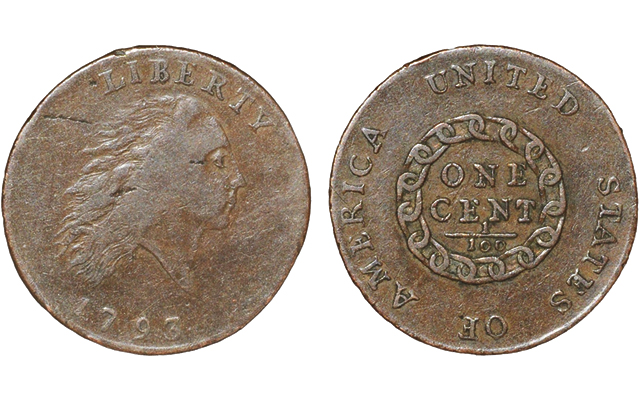 A roughly $17 purchase in England of a box of inconsequential British copper coins and one 1793 Flowing Hair, Chain, Vine and Bars cent turned into a bonanza for the purchaser when the coin sold at auction for the equivalent of $41,500 in U.S. dollars, which includes the buyer’s fee.

A 1793 Flowing Hair, Chain, Vine and Bars cent discovered in a box of coins purchased for £10 in England was sold at auction early this year separately for £24,200.

The winning price was the approximate equivalent of $41,500 in U.S. funds, while the initial cost of the box of coins equaled about $17.

The new discovery came to the attention of the U.S. marketplace only in late June.

The cent was consigned to TimeLine Auctions’ Feb. 5 and 6 sale, where it was offered with a “Good Fine” obverse and “Very Fine” reverse. The coin was sold “raw,” not in a grading service slab.

TimeLine Auctions’ numismatic experts recognized the importance of the 1793 Chain cent with Vine and Bars edge design and arranged for the coin to be sold at auction.

According to the auction lot description: “The chain reverse cent is accepted as being the first national U.S. coinage, following the Act of 14th January 1793 and was minted from four obverse and three reverse dies in late February to early March 1793, until the mint ran out of the copper blanks (when minting resumed a little later, the design had changed to the wreath reverse type), with 36,103 of the general type struck according to records and this die pairing believed to have struck about 4,850 coins, included within the delivery of 11,178 coins (from die pairings 1-A and 1-B) made on 1st March 1793.

“It is estimated that perhaps only about 2.8% or so examples of the general type survive today and this die pairing is recognised as being scarcer than the AMERI. type (many, if not most, surviving are badly worn or damaged) so perhaps around 150 or so extant.”

Timeline Auctions officials stated the buyer of the 1793 cent was from the United States through an agent acting on their behalf.