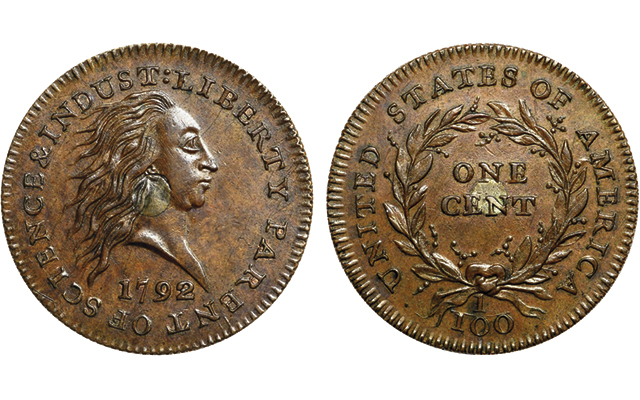 The 1792 Silver Center Cent pattern, Judd 1 (the 10th edition of United States Pattern Coins by J. Hewitt Judd, edited by Q. David Bowers), is one of 14 examples confirmed to exist.

The 1792 patterns reflect the first attempt by the U.S. government to establish a national coinage that was convenient to use.

Chief Coiner Henry Voigt recommended including a silver plug in a more conveniently sized planchet. Toegether the two metals would have the same intrinsic value as the originally envisioned larger copper piece. Voigt's proposal was not adopted, though experimental pattern pieces were struck.

For these patterns, a silver plug worth three-fourths of a cent was inserted into a tapered hole in the copper portion's center. The silver plug flattened out when the entire assemblage was struck on the screw press.

Examples of the Silver Center cent are known to exist with the silver plug absent.

Voigt's personal journal, according to Heritage's auction lot description, indicates the first Silver Center cents were struck on Dec. 17, 1792, with Thomas Jefferson reporting the following day by letter to President George Washington alerting him to the production.

Additional details on the Silver Center cent and the Heritage sale can be found on the Heritage Auctions website.