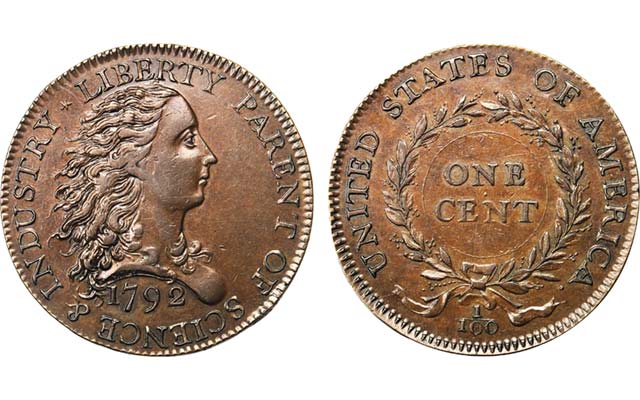 The sale of a 1792 Birch pattern cent for $1,175,000 was the highlight of Stack’s Bowers Galleries’ March 26 auction of the Henry P. Kendall Foundation Collection.

In total, the Kendall Foundation’s consignment realized just over $9.5 million and Stack’s Bowers’ various auctions held as part of the Whitman’s Baltimore Expo, which took place March 26 to 29, exceeded $18 million.

The collection was assembled primarily from the late 1950s through the 1990s by a collector who wishes to remain anonymous, with several notable additions made in the past 15 years.

In the introduction, Mike Hodder wrote that the collection “had its beginning in 1957, when a young man living in the Midwest wrote to Burton Hobson expressing his interest in beginning a type collection of U.S. coins.”

In a letter to Hobson — who at the time was Marshall Field & Company’s rare coin buyer — the collector wrote, “… my first purpose is to form a collection which will have historical significance. It furthers my objective to choose coins circulated long enough to have acquired the possibility of historical participation.” The collector added, “An uncirculated coin could never have been carried by a Revolutionary soldier, nor have been paid to a New England shipowner for a cargo of slaves or rum.”

While the collector had sold parts of his collection previously, deaccessioning three groups of coins through Stack’s in 1981 including groups of U.S. coins, counterstamped coins and pioneer gold pieces, he saved his finest pieces for more than 30 years until their recent sale in Baltimore.

In a separate catalog note, John Kraljevich Jr. wrote that the coins in the collection document the entire time line of early American history. He noted, “Beyond that, it was built with a genuine affection for the objects — enjoyment of the worn surfaces of a coin that served its purpose, appreciation for the intricate technical processes behind die failure, and the desirability of a fine provenance.”

The sale of the 1792 Birch cent made national news headlines, including CNN which wrote, “The first U.S. penny is 223 years old, and is worth a lot more than one cent,” and ABC News, which said that the cost was “quite a pretty penny.” Stack’s Bowers wrote, “The Birch cent is, simply, the first of a cultural phenomenon that is known the world over: it is the first American cent.”

The pattern Birch cent, classified as Judd 4 and Pollock 5 in the standard pattern reference books, is graded About Uncirculated 58 by Professional Coin Grading Service and the holder carries a green Certified Acceptance Corp. sticker indicating quality within the grade.

A different example, formerly in the Garrett and Partrick collections, graded Mint State 65 red and brown by Numismatic Guaranty Corp., with an NGC ?, sold for $2,585,000 this past January at Heritage’s auction of the Partrick Collection.

The majority of the seven known examples are in well-circulated condition; this piece may be considered as the second-finest known.

The lot description for the Kendall example explains: “Clearly the preponderance of these specimens are heavily circulated. Among the other copper Birch cents, only the Garrett-Partrick coin and the Charles Jay-Laird Park plain edge piece can be called high grade (with apologies to the Norweb coin, graded MS-61 BN NGC, but with a severe field of scratches). The Jay-Park coin, while technically superb, shows some significant obverse spotting that would lead all reasonable observers to term this the second finest Birch cent extant. With its smooth, even surfaces and superb, well-set color, it would be easy to call this the most choice Birch cent there is, pound for pound. The Garrett-Partrick coin reminds us of the old Benjamin Collins quote that: ‘any fixed color [is] preferred. Red, though beautiful, will not stay put.’ “

The description adds: “This coin has been an enduring benchmark in American numismatics, central to celebrated collection after celebrated collection. Lorin Parmelee liked this one so much that he upgraded from the one he owned already when he saw it in Bushnell, where it was described as ‘a sharp, bold impression, extremely fine, a splendid specimen of this great rarity and probably finest known.’ Sold as lot 7 in the Parmelee sale of 1890, it brought $85 ... it spent three decades in the John Story Jenks collection and three decades more with Col. Green. The Collector has held it for four decades now, longer than anyone else.”

As Kraljevich notes, the rich provenance of many of the Kendall pieces serve to enhance their value and desirability to collectors. He writes, “Acquired at major auctions from the 1960s until the first decade of the 21st century, many of the coins bear provenance names that are familiar to most: Stearns, Park, Garrett, Roper, Lauder, Picker, Norweb, Hain, and Ford.” For this piece, the ownership history can be seen as a reflection of the high value that previous owners have placed on the coin.

Another 1792 pattern offered from the Kendall Collection was a 1792 Flowing Hair half disme graded PCGS Very Fine 30 with a green CAC sticker that sold for $85,187.50. Purchased from Lester Merkin on March 31, 1966, it was described by Stack’s Bowers as a “lovely circulated example with ideal deep gray fields and contrasting lighter gray devices,” further noting that it is “Ideally centered on both sides, unusual for the issue, with a full frame of denticles encircling each.”

While considered a pattern, Stack’s Bowers states that while the history of half disme issue is plagued with “falsehoods and guesses,” it clarifies, “The high points are well clad in truth: no other issue can make such a sound claim to being the first official United States coin struck for circulation, and Jefferson and Washington were intimately familiar with this coin’s production.”