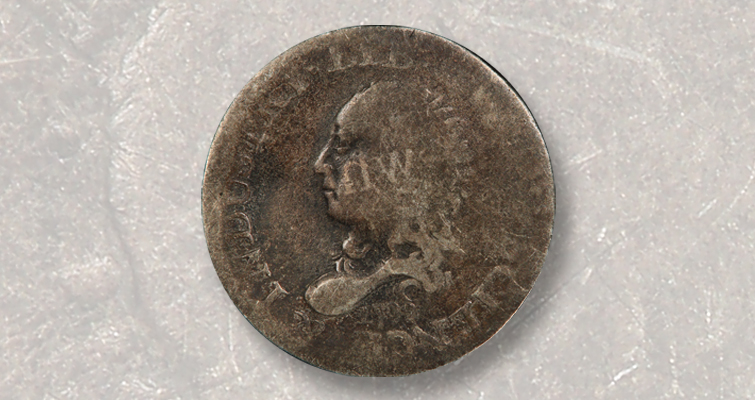 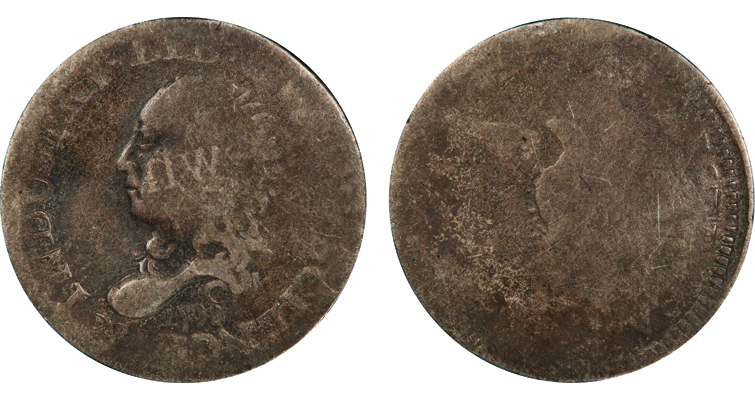 A vague outline of the eagle and a few denticles remain on the reverse of the 1792 Flowing Hair half disme.

The popularity of “low-ball” collecting boosted the price realized for a heavily circulated 1792 Flowing Hair half disme to $104,625 in a GreatCollections online auction that closed June 13. The value for the coin was listed in the PCGS Coin Guide at $18,500.

The coin was found in a dealer’s junk box in the state of Washington more than six months ago and purchased for less than $1 and then later verified and graded Fair 2 by Professional Coin Grading Service and stickered by Certified Acceptance Corp.

“Low-ball” collecting is the practice of assembling a collection of coins of a single series, or creating a type set of pieces across multiple series, all of which are certified in the lowest grades possible but are still aesthetically pleasing. Its popularity has grown in recent years, as enthusiastic hobbyists pursue registry sets of certified examples, often harder to locate than examples in much higher levels of preservation.

GreatCollections President Ian Russell had projected that the price realized would likely exceed the PCGS Price Guide estimate, but said he never expected the price realized to exceed that estimate by nearly 500 percent. Russell credited the strong bidding activity to those collectors pursuing the low-ball registry sets for bragging rights.

“It’s not necessarily the coins with the high grades that draw the high prices,” Russell said. “This is a well-circulated example of one of the first U.S. coins struck by the U.S. Mint. “It’s such an historical coin, having circulated for years and then preserved.”

The opening bid of $1 was recorded for the lot on April 27. When the auction closed June 13, a total of 57 bids had been placed by nine individual bidders. The winning hammer price of $93,000 was placed with 15 seconds left in the auction and was good enough to beat the underbidder who put in a final bid of $92,000 with seven seconds remaining in the sale.

In a June 15 telephone interview with Coin World, the buyer of the Fair 2 1792 coin from the GreatCollections auction, who wishes to remain anonymous, said he is a strong collector of “low-ball” coins across all series.

He said he has been collecting low-ball coins for several years, but only began to get the coins certified two years ago by third-party grading services.

The buyer-collector believes the addition of his latest purchase has the potential to vault him to the top of the low-ball registry sets. The buyer said he wrestled with what price to settle on for his final bid, and for whatever reason settled on $93,000, which was good enough to beat the underbidder by a mere $1,000.

The buyer said he was impressed by the quality and historical aspects of his acquisition.

“I knew I had to buy it because it is a ‘one of’ that circulated and has all that history. I didn’t want to get outbid by someone not coin educated but just had a lot of money to burn,” he said. 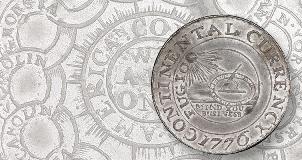 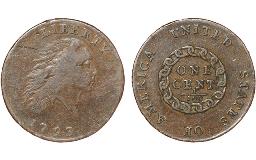 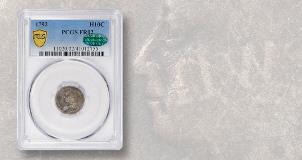