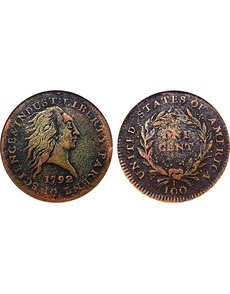 One of fewer than 10 examples of the 1792 Fusible Alloy cent will be offered Aug. 11 in Rosemont, Ill., by Heritage Numismatic Auctions.

The experimental piece will be offered as part of Heritage’s Platinum Night session in its Chicago Signature auction.

The present example last sold at public auction in August 2006 by American Numismatic Rarities for $218,500, but according to Heritage’s pedigree for the piece, it has traded hands privately several times since then for undisclosed sums.

The highest price paid at public auction for one of the 10 known pieces is $603,750 for an example graded Very Fine 30 by Professional Coin Grading Service and sold in Heritage’s January 2008 auction.

Probably the finest known example, according to Heritage’s pedigree, is in the National Numismatic Collection in the Smithsonian Institution’s Museum of American History. The piece, for which Heritage does not provide a grade, was once part of the U.S. Mint Cabinet. The Smithsonian piece is pictured on page 19 of The History of the National Numismatic Collections by Vladimir Clain-Stefanelli and was illustrated as the plate coin for Judd’s first through seventh editions.

The second finest known piece, according to Heritage, is an uncertified Extremely Fine 40 example that Auctions by Bowers and Merena sold for $35,200 in November 1988 in its sale of the Norweb Collection, Part III.

The 1792 pattern cents, Birch cent, half disme, disme and quarter were the prototypes for what later became the cent, 5-cent coin, dime and quarter dollar. These patterns were essential to the development of United States coinage, Heritage notes.

“The smaller cents from 1792 are all related, although their presentation differs,” according to Heritage. “The best known of these coins is the silver center cent, proposed by Henry Voigt, who anticipated a smaller cent diameter by 64 years.”

The value of 11 pennyweights of copper was set as the value for a cent, according to Heritage.

Four different formats were proposed and executed for these experimental coins, which Secretary of State Thomas Jefferson described in a letter to President Washington on Dec. 18, 1792, reprinted in the Heritage auction lot description:

“Th. Jefferson has the honor to send the President two cents made on Voigt’s plan by putting a silver plug worth ¾ of a cent into a copper worth ¼ cent,” wrote Jefferson. “Mr. Rittenhouse is about to make a few by mixing the same plug by fusion with the same quantity of copper. He will then make of copper alone of the same size, and lastly he will make the real cent as ordered by Congress, four times as big.”

The piece described as having a silver plug is the Silver Center cent.

From the outset it is apparent that the smaller cents were experimental in nature as seen by Jefferson’s reference to “the real cent” being “four times as big,” according to Heritage. ¦