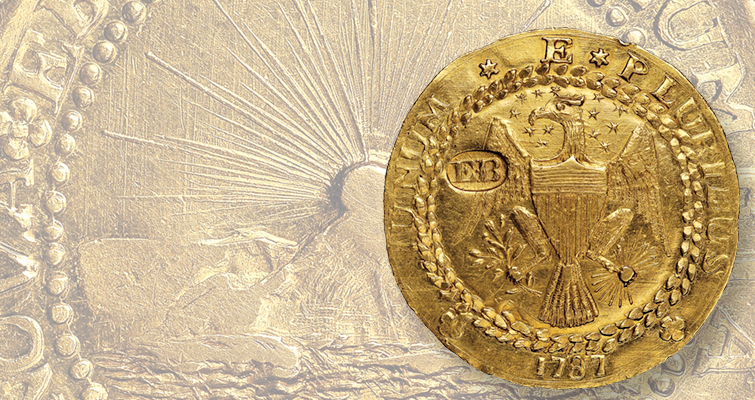 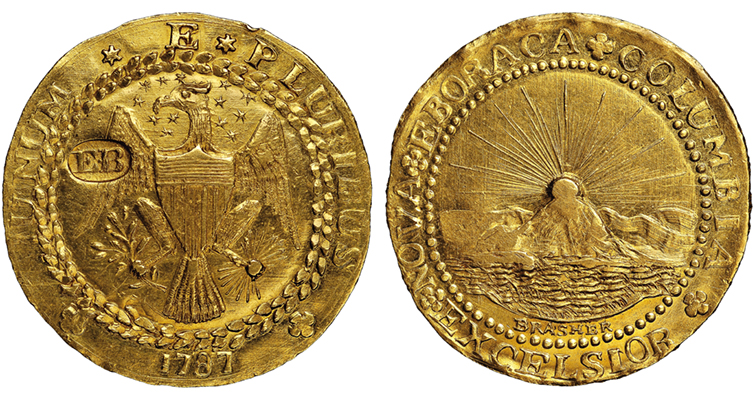 The 1787 Brasher EB Punch on Wing doubloon, one of six examples known, last sold at public auction in 2014 after its previous owner held it for more than three decades
Previous
Next

A 1787 Brasher, EB Punch on Wing gold doubloon graded Mint State 63 by Numismatic Guaranty Corp. and stickered by Certified Acceptance Corp. is reported to have changed hands in a private transaction brokered through Heritage Auctions for more than $5 million.

Identified as the discovery coin, the doubloon counts among its previous owners numismatic luminaries Robert Gilmor Jr., Harold P. Newlin, Robert Coulton Davis, Virgil Brand and Walter Perschke. Perschke consigned the coin to the 2014 Heritage sale. Perschke had owned the coin since July 27, 1979, after he paid $430,000 for it during the RARCOA session of the Auction ‘79 Apostrophe sale. Perschke was disappointed the coin did not bring a higher price at the 2014 auction.

The coin first surfaced in Gilmor’s collection in the 1830s, according to Heritage’s pedigree description.

The Brasher doubloons were fabricated by New York silversmith Ephraim Brasher, George Washington’s next-door neighbor in New York City after the Revolutionary War. Brasher stamped each of the known pieces with his EB hallmark, which also appeared on various works of silver he created as a silversmith, and on various gold coins he had “regulated,” i.e., checked and certified the gold content.

The example recently sold is considered the finest of seven known 1787 Brasher doubloons, six of them being EB Punch on Wing and only one example known being the EB Punch on Breast.

Todd Imhof, executive vice president of Heritage Auctions, said the EB Punch on Wing Brasher doubloon was purchased by a knowledgeable, advanced collector from the West Coast who wishes to remain anonymous. The collector has an extensive knowledge and appreciation of early U.S. coins, Imhof said, noting the Brasher doubloon is the most expensive coin in his collection.

Imhof said the collector indicated the timing was right to purchase the coin before the price went any higher.

Imhof said he was surprised in 2014 when the final price paid for the doubloon at the Florida United Numismatists Convention sale did not reach his pre-sale estimate of $5 million to $6 million.

Adam Crum, vice president of Monaco Rare Coins in Newport Beach, California, said he too was surprised the bidding did not go higher than it did back in 2014, when he placed the winning bid to acquire the coin for Monaco’s inventory. Crum said he was prepared to bid up to $6 million for the coin, the same price he was offered soon after buying the coin by another potential buyer.

Crum said the doubloon has been used as a branding tool for the firm, which he credits with the recent sales of several rare U.S. coins at prices exceeding $1 million each. Crum said he was recently again offered $6 million for the doubloon but turned the offer down.

Crum said he offered Perschke in 2013 more than he eventually paid in the 2014 sale, but Perschke wanted to gamble that the coin could bring more at auction.

Brasher’s initial foray into private coinage was his creation of the Lima Style doubloons that resemble the designs of the widely circulated 1742-dated Spanish 8-escudo coins.

The 8-escudo coins were called “doblons” in the Spanish colonies. The term was adopted and Anglicized to “doubloon” in the United States. The 8-escudo coins and Brasher doubloon were valued at the U.S. equivalent of $16. After making the Lima Style doubloons, Brasher is said to have then tried his hand with copper coinage before eventually commencing with his New York Style 1787 doubloons.

The obverse design of the New York Style doubloon features the sun rising over the peak of a mountain with a body of water in the foreground was adapted from the state coat of arms of New York. Brasher’s surname appears below the waves. The central device is encircled by beads around which is inscribed NOVA EBORACA COLUMBIA EXCELSIOR with each word separated by a rosette. The legend translates to “New York, America, Ever Higher.”

The reverse depicts an eagle with outstretched wings and a shield on its breast, with a bundle of arrows in its sinister claw (to the viewer’s right) and an olive branch in its dexter claw. Thirteen stars surround the eagle’s head. A double band of leaves wreaths the eagle; beyond the wreath, arched around the upper border, the words UNUM E PLURIBUS are separated by stars. The date 1787 is flanked by rosettes in the border at the bottom. 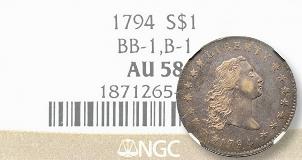 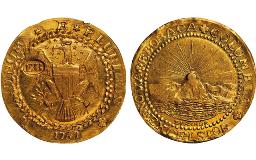