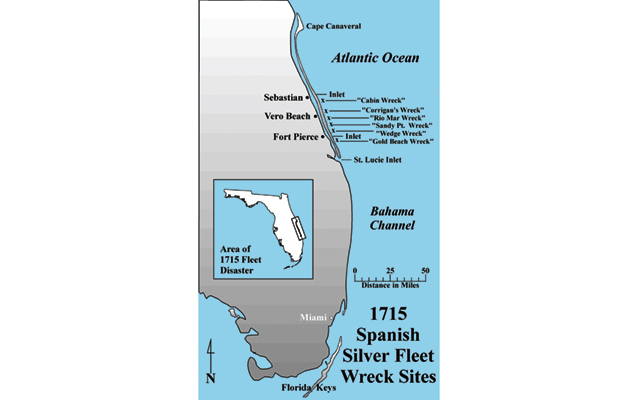 Map shows the relationship of the six known wrecks of the 1715 Fleet, identified by their local nicknames, rather than by their given names. 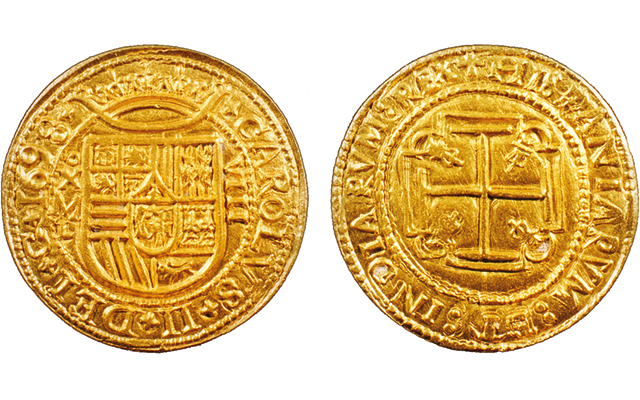 A 1698 Royal 8-escudo piece from the Mexico City mint. It was found in 1998 by divers working under the Mel Fisher lease off Fort Pierce on what was called the “Gold Beach Wreck.” The obverse of the coin shows a crowned shield; the reverse displays a bold cross. The date, 1698, is at the 11 o’clock position in the legend on the obverse. 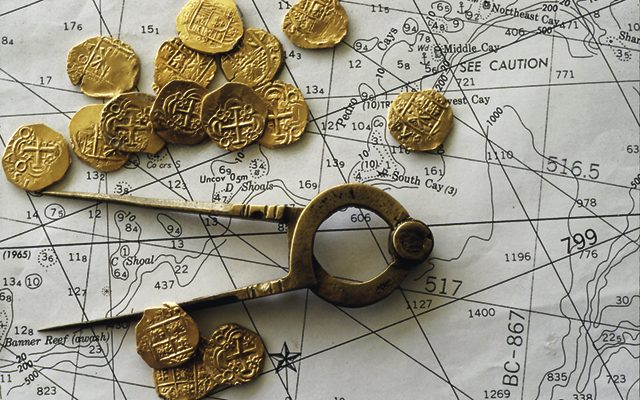 Among the items recovered from the wreckage of the 1715 Fleet is this bronze navigational divider displayed with a group of 2-escudo coins from the Santa Fe De Bogata Mint. 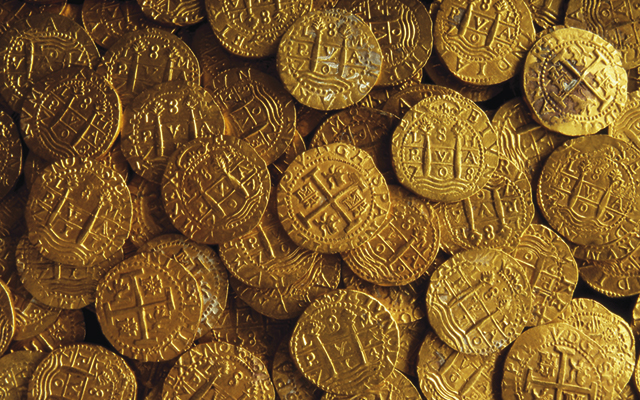 These silver 8- and 4-real coins from the Spanish Colonial Mint at Mexico City are from a private collection. Irregular shapes, hammer marks, blunted edges and incomplete die impression are apparent. 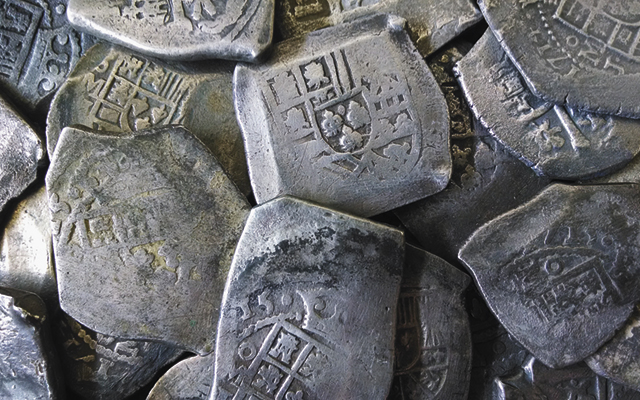 Years of planning are coming together toward marking the 300th anniversary of the July 31, 1715, sinking of the Spanish treasure fleet off the eastern coast of Florida during a storm.

Kicking off the commemoration will be a selected display of recovered sunken treasure and artifacts from the State of Florida’s extensive collection related to the fleet. The items will be exhibited Jan. 8 to 11, 2015, at the Florida United Numismatists Convention at the Orange County Convention Center in Orlando.

To bring the treasure exhibit together, Ben Costello, as one of three directors of the 1715 Fleet Society, collaborated with others. From the collecting community are Bob Hurst, past FUN president and current FUN board of directors member; and Ernie Richards, publisher of PLVS VLTRA Newsletter from En Rada Publications. Richards is also a 1715 Fleet Society director.

Phil Flemming from Scottsdale, Ariz., the third director of the 1715 Fleet Society, is the designated academic coordinator for the seminar. Flemming is responsible for selecting the topics to be presented as well as the presenters.

Costello said Aug. 13 that arrangements have been made with the Indian River County Main Library in Vero Beach to present lectures, displays and artifacts related to the 1715 Fleet.

“This may be one of the last interviews of this group together.”

The Real Eight Co. Inc. was incorporated in 1961 for the purpose of conducting treasure salvage operations from the sites of the wrecked ships from the 1715 Fleet.

Costello said the library is planning to show the video as part of the program that is being created. The library event is scheduled for 10 a.m. to 4 p.m. July 31.

Plans are also being developed for a lecture or workshop at the McLarty Treasure Museum in Sebastian, Fla., and the Mel Fisher Museum, also in Sebastian.

Captain Hiram’s Resort in Sebastian is the official venue for the 1715 Fleet Society’s banquet from 6 to 10 p.m. July 30 in the facility’s Tiffany Room.

A limited number of 300th Anniversary Commemorative Programs are being planned for publication, with one copy distributed to each banquet attendee, according to Costello.

Captain Hiram’s Resort has already reserved a block of rooms at a special rate for the week of July 26 through Aug. 2. Interested parties may contact the resort by telephone at 772-388-8588 and use the password 1715 to get the special event rate. Similar arrangements are being made with other hotels in the Treasure Coast communities of Vero Beach and Fort Pierce.

Continuous updates to the 300th anniversary events as they develop can be followed on the 1715FleetSociety.com and EnRada.com websites.

Costello said the 1715 Fleet Society website is being subjected to significant revamping to make the website more dynamic and interactive.

The 1715 Fleet Society website provides extensive historical documentation of the 1715 Fleet, its fate, and images of recovered treasure.

The destruction of the 1715 Fleet was the fourth loss of New World treasure for the Spanish crown in just over a dozen years.

Ships laden with silver and gold mined in Spain’s New World colonies sailed to Spain in fleets for mutual protection.

With one fleet sunk by English warships at Vigo Bay in 1702, another sunk in 1708 off Cartegena, Columbia, and a third lost in a hurricane in 1711 off the coast of Cuba, the 1715 Fleet was being counted upon to refill Spain’s financially strapped coffers with accumulated gold and silver as the War of Succession came to a close in 1715.

Eleven Spanish ships assembled during the summer of 1715 in Havana. The fleet comprised the six-ship Escuadrón de Tierra Firme, which served the South American trade routes out of Cartagena, and the five-ship Flota de Nueva España, which served the Mexico and Manila Galleons trade route out of Veracruz on the southeastern coast of present-day Mexico.

Accompanying the Spanish vessels was the French warship, The Griffon, which was on an official mission in Veracruz to collect 48,801 silver pieces of eight from the Duke of Linares, governor of Veracruz.

Millions of silver and gold coins and bars filled many of the Spanish vessels’s cargo holds.

On July 30, 1715, six days after leaving Havana harbor for Spain, the ships encountered a violent hurricane as they followed the east coast of Florida.

The full brunt of the storm struck the fleet at 4 a.m. July 31, forcing the vessels onto the jagged rocks, splintering them upon impact. Of the roughly 2,500 people on the Spanish ships, more than 1,000 perished. The Griffon and its crew survived the storm, having changed course during its peak without knowing the fate of the Spanish ships.

The catastrophe dumped the Spanish treasure into the ocean. Over the next three years, salvage efforts resulted in recovery of millions of pieces of gold and silver, until privateers, pirates and loots swooped in like vultures to take a share. Still, some treasure remained on the bottom of the sea.

In 1960, some 250 years after the wreck sites were left undisturbed, the Real Eight Co. Inc. launched the modern day age of treasure recovery, recounted by Kip Wagner in his book, Pieces of Eight.

Pieces of treasure from the 1715 Fleet continue to be found. Whenever a hurricane strikes the same area of Florida where the Spanish fleet encountered its end in 1715, it is common to afterward find metal detectorists and others combing the beach sand in search of the treasure that washes ashore.