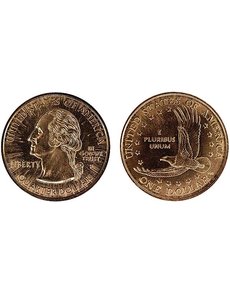 NGC graded this most recently reported Sacagawea dollar/Washington quarter dollar error, now the 11th known example, as Mint State 67. It was struck from Die Pair 1. The close-up image shows the diagnostic die crack on the reverse, on the f in of. 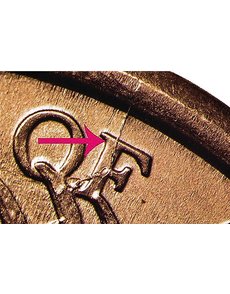 NGC graded this most recently reported Sacagawea dollar/Washington quarter dollar error, now the 11th known example, as Mint State 67. It was struck from Die Pair 1. The close-up image shows the diagnostic die crack on the reverse, on the f in of.

An 11th example of the undated double-denominated Sacagawea dollar/Washington quarter dollar mule error coin has surfaced, 11 years after the first example was found in Arkansas in 2000.

Nicholas P. Brown, owner of Majestic Rarities in Chicago, confirmed to Coin World July 12 his purchase of the coin from its owner, who wishes to remain anonymous. Brown would not disclose the purchase price, and added he had not yet physically seen the coin.

The coin was submitted to Numismatic Guaranty Corp., which authenticated the coin as an example of the double-denomination mule error and graded it Mint State 67, according to David J. Camire, president of Numismatic Conservation Services, a sister company to NGC for whom he is also the error coin specialist.

Camire said the current example is tied for the finest known specimen among the 11 confirmed pieces.

A mule is a coin, token or medal struck with dies not intended to be paired together.

What makes the production of this mule error more unusual is that a State quarter dollar obverse die was paired with a Sacagawea dollar reverse die not once, but three times. The known mules are known to have been struck with three separate and distinct die pairs mounted in a coinage press dedicated to the production of dollar coins.

Camire said Brown's coin was struck from Die Pair 1. The key diagnostic is the reverse for Die Pair 1 exhibits a die crack in the f in of in united states of america that is absent from the reverses from Die Pairs 2 and 3. Complete diagnostics for all three die pairs appear later in this article.

Brown said July 13 that he was one of several persons approached by the unnamed seller about buying the coin, a process that began three weeks before the deal was completed. Brown said once he learned he was the top bidder, he had the seller send the coin directly to NGC for authentication and certification before the transaction would be completed. The transaction was completed, Brown said, after he received confirmation from NGC that the mule had indeed been authenticated as genuine, graded and encapsulated.

Brown would not disclose the specific location of the seller, other than to say the coin came from the East Coast. He said the seller acquired the coin through purchase and held onto it for the past 10 to 10 and a half years. Brown said the individual who sold the coin to him did not learn from the person from whom it was originally purchased how the coin was discovered — whether in change, from a roll or bag of coins, or purchased from someone else.

Brown does not plan to sell the coin at this time, but will have it on display at his table Aug. 16 to 20 at the American Numismatic Association World's Fair of Money in Rosemont, Ill.

For error coin collectors, Sacagawea dollars and State quarter dollars offered hobbyists two new series to search through in 2000 in the hopes of finding something valuable. Until May of that year, however, no one suspected that an error would be found that combined designs from both coins.

In June 2000, Numismatic Guaranty Corp. announced that it had authenticated a coin bearing the obverse of a State quarter dollar and the reverse of a Sacagawea dollar, struck on a dollar planchet. The mixture of designs struck by dies for two different denominations was the first error of its kind confirmed on a U.S. coin in the 208-year history of the U.S. Mint — a type of error called a mule by specialists.

The quarter dollar/dollar mules discovered in 2000 are undated and bear the P Mint mark for the Philadelphia Mint. The reverse die for State quarter dollars (not used for the mule) bears the date along the top border, the same side as the design representing the respective state. The date appears on the obverse die for the 2000 to 2008 Sacagawea dollars (also not used).

The first example of the mule was discovered by Frank Wallis in late May 2000 in an Uncirculated 25-coin roll of Sacagawea dollars obtained from First National Bank & Trust in Mountain Home, Ark. The area is part of the St. Louis Federal Reserve District.

NGC graded the Wallis coin Mint State 66, but a month later the coin was crossed over to a Professional Coin Grading Service encapsulation. PCGS also graded the coin MS-66.

Since the original find, grading services have authenticated, in all, 11 examples of the mule. Nine of the coins have been sold, either in private transactions or at auction, at published prices reaching as high as $70,000. Brown notes that the authors of the 100 Greatest book have confirmation of two pieces changing hands for in excess of $200,000. One coin remains the property of the man who found it.

U.S. Mint officials determined the mules were struck sometime in late April or early May 2000. Coin World sources in 2000 indicated that the Mint may have produced as many as three bins of the coins, although the sources could not tell Coin World what size bins were involved. If the larger of two different bins in typical use at the Mint were involved, the number of mules struck could have totaled several hundred thousand pieces.

When Mint officials discovered the error, they impounded several bins — one that may have contained tens of thousands of the mule errors struck by one press, as well as the bins from two other adjoining coining presses. The coins were ordered destroyed.

Production of the mules led to an intensive investigation by Treasury and Mint authorities. The investigation led authorities to a Federal Reserve-contracted coin terminal and wrapping facility located near the Philadelphia Mint, and authorities advised officials there to be on the lookout for any of the mule errors. An undisclosed number of mules were found at the facility.

While a government investigation found that the errors were produced by mistake and not deliberately, two former Philadelphia Mint coin press operators were prosecuted on charges of selling, but not stealing, up to five of the mules and converting the profits to their own use.

U.S. Mint officials in the summer of 2002 indicated the possibility they might seek forfeiture of some of the double-denomination errors depending on when they were discovered and whether they may have left the Philadelphia Mint illegally, but to this date officials have not pursued civil forfeiture proceedings.

Hobby experts by the fall of 2000 had determined that multiple die pairs existed for the coin, which might suggest large numbers of the errors were struck. Government investigators were slow to accept the findings of numismatists that multiple die pairs were used in making the coins; investigators did not accept the findings of numismatists until September 2001.

Here's how to distinguish the three die pairs:

??Die Pair 1: The reverse for Die Pair 1 exhibits a die crack in the f in of in united states of america that is absent from the reverses from Die Pairs 2 and 3. The obverse exhibits numerous radial striations attributable to stresses involved during striking, resulting from the slight differences in size between the two dies. The discovery coin is from Die Pair 1.

??Die Pair 2: Die Pair 2 exhibits a perfect obverse die, but a reverse that shows three noticeable die cracks: one each projecting from the rightmost points of the stars above the e of one and d of dollar and a third, curved die crack running along the wing directly above these two letters.

??Die Pair 3: For Die Pair 3, the obverse has been described as “fresh and frosty.” The obverse of the Die Pair 3 coins shows just a hint of the radial lines found on the discovery example. A small die gouge appears in front of Washington's lips. The reverse appears perfect and exhibits no die cracks.

In addition to the genuine mules, collectors should be aware that altered coins/replicas resembling the mules are also in the market.

To identify the replica, look for a seam where the field meets the rim. The altered piece's weight will be off from the 8.1 grams of a genuine Sacagawea dollar, and the altered piece will produce a thud instead of a distinct ring when tapped, a result of its method of assemblage.