100-ounce gold nugget to be offered at March 15 auction 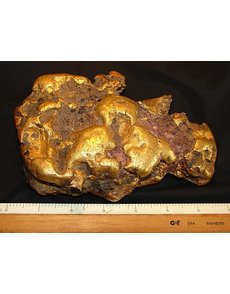 This 100-ounce gold nugget may be the sole remaining authenticated large gold nugget from the original California gold rush region. The nugget was found in February 2010.

A 100-troy-ounce gold nugget will be offered at auction in Sacramento, Calif., on March 15 by Holabird-Kagin Americana.

The Washington nugget, so named because it was found near the gold rush mining camp of Washington, Calif., was authenticated by geologist Fred Holabird of Holabird-Kagin Americana. The nugget is valued at $250,000 to $400,000.

The nugget was found in an unmined section of the Omega-Malakoff Tertiary Channel in February 2010 by an area land owner.

According to Holabird, the nugget “may be the sole remaining authenticated large gold nugget of 100 troy ounce caliber” from the original California gold rush region. The nugget weighs approximately 6 pounds and 13 ounces.

The nugget will be offered in Session C of Holabird-Kagin Americana’s Golden West Auction. The Golden West Auction will feature three sessions covering what firm officials call some of the most important historical Western material from the gold rush periods of California, Nevada and Colorado.

The material has been assembled from many of the great Western collections, as well as original material handed down within gold rush families, held intact for more than 100 years.

Session A will be held March 11 at the annual Western States Token Society token auction and will highlight the finest Western Indian trader, fort and territorial token collections ever assembled, according to the firm.

Indian trader tokens are an important form of money exchanged between Indians and Anglos in the late 19th and early 20th centuries.

Trading posts were a way of life in the isolated outposts of the Western plains and mountains, swapping furs, rugs, coats and other items for food stuffs and equipment.

Session B is scheduled for March 14 and includes a photograph collection of American saloon interiors, saloon ephemera and gold rush region saloon tokens, also known as pioneer minor coinage. The saloon section also includes a large collection of the ultra-rare “good-for” mirrors, many with pictorial representations of the fabulous “gay-90s” saloon girls. Lastly, this session will include a collection of so-called dollar medals and $50 slug facsimiles.

In addition to the Washington nugget, Session C will feature several other gold and mineral specimens along with two large original 19th century bullion scales and some original gold rush art (including a number of original Currier & Ives items).

Also offered will be a gold rush banking collection from California and Nevada circa the 1850s to 1860s. Contained in that collection are more than 100 different bills of exchange, an early form of circulating currency on the West Coast.

Some of the highlights of what is billed as the Gold Rush Collection are documents from the original 1910 San Francisco sale of the estate of James King of William, and documents signed by Adolph Sutro, California coiner F.D. Kohler and others.

A very rare letter book from Nevada mining and railroad magnate Hume Yerington from the mid-1860s contains “incredible” information about his life prior to his railroad successes, according to Holabird-Kagin.

Accompanying the Mint ephemera is a section of California counters and rare California gold rush tokens.

For more information about the auction or the 100-ounce gold nugget, or to order a catalog, contact Holabird Americana, 3555 Airway Drive, No. 308, Reno, NV 89511, telephone the firm at (775) 852-8822, e-mail the company at info@holabirdamericana.com or visit its Web site at www.holabirdamericana.com. ¦