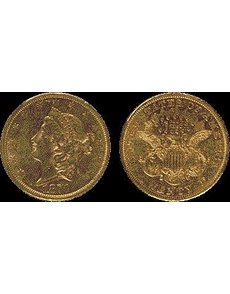 The current auction record for an 1870-CC double eagle is $414,000. The record was set in a March 1, 2009, Bowers and Merena auction for an example graded About Uncirculated 55 by Numismatic Guaranty Corp.

The stolen coin, graded NGC AU-58, was the lone coin in the Brinks shipment from Professional Coin Grading Service in Newport Beach, Calif., to Heritage Auctions in Dallas.

The investigation into the theft is being spearheaded by the FBI in Dallas. Katherine Chaumont, the FBI’s public affairs specialist in Dallas, confirmed to Coin World Sept. 17 that the investigation is ongoing.

Chaumont said anyone with information about the theft should contact the FBI’s main telephone number in Dallas at 972-559-5000.

Heritage officials said the stolen coin is fully covered under the firm’s insurance, but they still want the coin to be found.

The $100,000 reward and its dissemination for any information submitted concerning the coin’s whereabouts are being handled by Doug Davis from the Numismatic Crime Information Center in Pantego, Texas (website: www.numismaticcrimes.org, telephone 817-723-7231).

No one associated with the case is disclosing who is posting the reward.

Minshull said the coin has been in the family of the consignor for more than 50 years, and surfaced when submitted for consignment in 2011. After being certified by NGC, the coin was submitted to PCGS to be crossed over into a PCGS holder.

The coin was shipped back to Heritage, however, in its NGC encapsulation with certification number 3414402-001.

Minshull said the coin theft was discovered when the Brinks shipment arrived at Heritage in Dallas on Oct. 17, 2011, sans the rarity.

The stolen coin is one of fewer than 50 examples extant from a recorded mintage of 3,789 double eagles struck at the Carson City Mint in Nevada during its inaugural year of production. The entire recorded production was released into circulation. All known examples show signs of wear. ¦