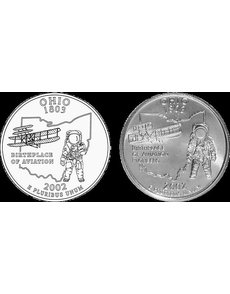 The Ohio committee approved a design, left, that shows a 1905 version of the Wright Flyer, an astronaut in a spacesuit, and an outline of the state, with inscription. The adopted design, right, has a modified inscription.

The 2002 Ohio quarter dollar was released 10 years ago this spring. I stumbled across the press packet from the coin’s March 18, 2002, release ceremony while cleaning out a bookcase the other day and was struck by how much things have changed.

The U.S. Mint Information Kit contained a 3.5-inch floppy disk of coin images. The floppy technology has been superseded at least twice since then. I couldn’t make it work if I wanted. I’ve bought three computers since 2002 and none will accept a floppy.

Coin dealer Tom Noe, chairman of the committee that chose the coin’s design, sits in prison now, convicted of a numismatic-related crime. Then Ohio Gov. Bob Taft, the man who appointed Noe, avoided prison in an unrelated violation of Ohio’s ethics laws.

Hundreds of ordinary people, at least one notable artist and countless schoolchildren submitted designs for the Ohio quarter dollar in 2000. A committee that included Noe was appointed by Taft to manage the process. The committee decided early on that Ohio’s coin would say something about the state to future generations.

Artist John Ruthven’s drawing of Ulysses S. Grant and his horse, Cincinnati, didn’t make the cut. Neither did one showing Perry’s Victory and International Peace Memorial on South Bass Island in Lake Erie. Aviation was a natural for the Ohio quarter dollar. The state is home to the Wright brothers; John Glenn, the first American to orbit the Earth; and Apollo 11 Commander Neil Armstrong, the first man on the moon.

The committee approved a design that showed a 1905 version of the Wright Flyer and an astronaut in a spacesuit superimposed on an outline of the state. While the astronaut’s face is not visible, it was generally understood the image is based on a photo Armstrong took on the lunar surface of fellow astronaut Col. Edwin “Buzz” Aldrin Jr.

Ohioans thought North Carolina, the site the Wrights chose for their first flight because of favorable winds, pulled strings to get the change. U.S. Mint spokesman Michael White said at the time that North Carolina had nothing to do with it. The addition of the word “pioneers,” he said, was a grammatical decision.

“Technically, aviation can’t have a birthplace,” White maintained. “People can have birthplaces, but things can’t.”

Things have changed, too, for the rejected Battle of Lake Erie monument. That 352-foot-tall Doric column will get its moment in the numismatic sun next year as part of the America the Beautiful quarter dollar series.