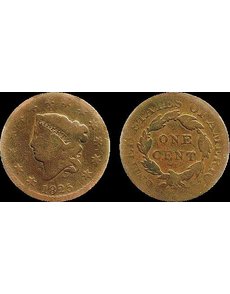 Florida collector Scott Nelson did not know the rarity of this 1825 Coronet cent when he purchased the coin roughly six years ago on eBay for $10. He recently learned it might be worth 1,000 or more times what he paid for it. 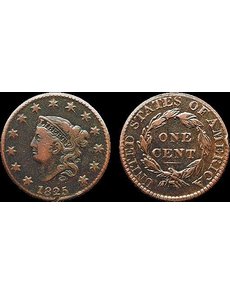 The finest of the four known N-5 1825 Coronet cents is this Very Fine 20, Net Fine 12 example attributed in August 2012 by Chris McCawley.

Florida collector Scott Nelson thought it a bit unusual April 7 when, not one, but two bidders requested that he end his eBay auction early for an 1825 Coronet cent that he had posted only 15 minutes before, so they could buy the coin outright.

Nelson did decide to end the auction early, but only to do a little numismatic sleuthing, believing that what he was offering with an opening bid of $10 might be worth considerably more. Intuition proved he was right.

Even in Good 4 condition, Nelson’s coin may be worth 1,000 or more times what he paid for it.

The 1825 Coronet cent Nelson said he purchased for $10 sometime in 2007 or 2008 is only the fourth confirmed example of the Newcomb 5 variety (United States Copper Cents 1816-1857 by Howard Newcomb) — a variety rediscovered in November 2011 by collector Tom Deck.

Until Deck’s discovery through an eBay purchase for less than $100, the variety’s existence had been in dispute since first published in 1883 by researcher Frank D. Andrews.

After Deck’s discovery, two more examples of the variety surfaced — one discovered by Virginia collector Henry Hettger, and the other by Texas dealer Chris McCawley. And now Nelson’s coin can be added to the census.

Nelson considers himself a casual collector. He said when he initially bought the 1825 cent on eBay he just considered it to be a neat coin.

“I didn’t realize what I had until I went to resell it on eBay, and within 15 minutes of listing the coin, I had emails from two bidders asking if I would switch my auction to a Buy It Now, and asking what I would be willing to sell it for,” Nelson said. “The second bidder offered me $75 even though he stated that it would not realize that price in an auction. It seemed odd that he would offer me more than he thought it would even sell for.

“At that point, I quickly realized that I had something interesting, although I had no idea it would be anything this major! So I cancelled the listing until I could find out more about the coin. I’m glad I did!”

Nelson said that on April 7, the same day he canceled his eBay auction for the 1825 Coronet cent, he conducted a number of online searches that led him to the story about Deck’s discovery piece for the 1825 N-5 variety.

Coin World published an extensive story on Deck’s discovery in the Jan. 23, 2012, issue.

“I’m still amazed by all of this,” Deck said. “Basically, Scott emailed me out of the blue, wondering what he had. I’m pretty sure he just Googled ‘large cents’ and found me that way. When I saw a photo of the coin, I was thinking, ‘you’ve got to be kidding me!’ ... I remember emailing Scott back, telling him to call me, and that I had some very exciting news for him.”

Deck also put Nelson in touch with John D. Wright, who has collected and researched large cents for more than five decades, and Bob Grellman, author of Attribution Guide for United States Large Cents: 1840-1857, who partners with Chris McCawley in McCawley & Grellman, The Copper Specialists.

Wright and Grellman both reviewed Nelson’s images of his coin, while Grellman also examined the actual coin.

Nelson plans to offer his N-5 1825 Coronet cent at auction in September through McCawley & Grellman, in conjunction with Ira & Larry Goldberg Auctioneers.

Grellman, who cataloged Nelson’s coin for the auction, said it was likely the coin would be submitted to Professional Coin Grading Service for certification and encapsulation.

“I grade it Good 4” using Early American Coppers standards, Grellman said. “It is comparable to the Deck coin with very slightly better details. I have seen all four of the known examples. ... I have been involved in placing the first three into good collections privately. The Scott Nelson coin will be the first to be offered at auction. My estimate of value is $10,000-UP.”

Grellman said Hettger found his Good 4 N-5 1825 Coronet cent in 2012 after reading the Coin World article detailing Deck’s discovery. Grellman said he sold the coin in April 2012 to another collector on Hettger’s behalf.

Grellman said McCawley discovered his Very Fine 20, Net Fine 12 N-5 1825 Coronet cent among pieces he had owned for some time but had not taken the time to attribute. McCawley took the time also after reading the Coin World article. McCawley discovered his example in August 2012. Grellman said he placed McCawley’s 1825 cent with another collector on McCawley’s behalf in September.

Deck said he traded his discovery coin to McCawley in exchange for a number of other early large cents he was seeking.

When Deck purchased his 1825 Coronet cent on eBay, it had been attributed as the Newcomb 4 variety. The N-4 variety of 1825 Coronet cent represents the marriage of obverse die 4 and reverse die D. For decades, researchers had believed that both dies were used only in the N-4 marriage, and not paired with other dies to create different varieties.

Numismatists determined that the N-5 coin bears the obverse 4 of the N-4 pairing and the reverse J of the N-10 variety. The coins validate the die pairing first reported in print in 1883 but listed as “unknown” in Newcomb’s 1944 book with the N-5 catalog designation, and later described in a 1992 book by Wright, The Cent Book: 1816-1839, as a “fiction” and one of Andrews’ “few mistakes.” ¦